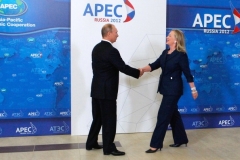 "You know, remember, Putin made it his mission to deny me the presidency, in part because, you know, I did raise issues that were uncomfortable with him," Clinton told MSNBC's "Morning Joe" on Wednesday.

She spoke as President Joe Biden and Russian President Vladimir Putin were meeting in Geneva, Switzerland.

"I did speak out about the oppression and, frankly, the rigged elections in Russia because I think you need both an inside and an outside game. You need a public and a private approach to Putin," Clinton said.

"And, you know, that's what Joe Biden gets. And that's why he's behind closed doors right now, trying to get the measure of where Putin is today. Not where he was 5 or 10 or 20 years ago. Where is he today and what are the best levers we can do to protect and defend our country and our friends around the world."

Clinton said it's important to keep talking with the Russians, to keep trying to get them to see what the two nations have in common.

"So I think you can't be either starry-eyed or totally turning your back. You have to walk what is an uncomfortable but necessary path. How do we calibrate, how do we get them to do something, how do we stop them from doing something? How do we impose costs if they do do something? Joe Biden has learned a lot, as we all have."

"He has a clear mission to undermine democracies, first and foremost, the United States. As President Biden has said, we are in a struggle between autocracy and democracy. And I think that President Biden, number one, wants to make clear to Putin that where there can be cooperation, we welcome that. On climate change, for example -- I think also on nuclear proliferation, on working in some way to get our arms around the threat posed by cyber and other issues.

"But he has to also make clear that, you know, Putin's strategy over the last four years of literally just ridiculing the United States, undermining us, allowing as well as overseeing attacks on our election structure, on our energy delivery system, on so much else, has to stop."

Asked if she thinks Congress will back up Biden on "whatever message he gives to President Putin," Clinton referred to the current state of political "divisiveness."

"There has been, as you rightly know, a big flirtation by some on the right in the Republican Party with the Putin model. They really resonate to the authoritarianism, and they find that kind of macho approach to everything quite attractive. So will there be some who take positions like, whatever he does, it wasn't enough, or some who say it was too much? Of course.

"I still believe -- I guess I want to believe and I have to believe -- that the core of elected officials in our Congress will back up our president in not only speaking firmly but also making clear there will be consequences if the kind of behavior, particularly with the cyber attacks, continues.

Clinton said the U.S. has "overwhelming cyber capabilities, were we to use them."

"Nobody wants to get in to that-tit for-tat that -- God knows where it might lead. But Russia and Putin understand that and so they're going to keep probing, keep pushing, until they get stopped here at home and over there.

"And that's what we have to have an understanding with the Congress about doing...Let's figure out how to get to an even place with more predictability and start a process so we don't slide into disastrous cyber consequences, where our nuclear controls, air traffic system, all of that might possibly be put at risk."