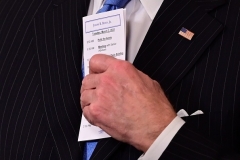 President Joe Biden holds a schedule as he delivers remarks on the government's pandemic response on March 2, 2021. (Photo by JIM WATSON/AFP via Getty Images)

(CNSNews.com) - President Joe Biden's cognitive struggles, ignored by the partisan media and his Democrat allies, should be a concern for all Americans, as they watch Biden forget names, struggle to read the teleprompter, refer to his notecards in less scripted moments, and even ask, "What am I doing here?"

"Every single Democrat needs to be asked, do they see Joe struggling cognitively? It is a legitimate question," Fox News's Sean Hannity said Tuesday night. "It's a question that Democrats and the media mob had no trouble asking about Ronald Reagan in 1984 -- the age question. They had no problem raising these issues with John McCain when he was running in 2008."

"Well, I do see what you see, Sean, when you really look at all of this," Meadows said.

"But what we are seeing is, is really an intentional and deliberate act by this administration to keep the president of the United States from having to interact with the press and the American people." 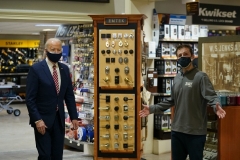 For example, on Tuesday, when President Biden visited a D.C. hardware store to show his concern for small businesses, his handlers ushered reporters out of the room as Biden was still talking:

Rep. Jim Jordan contrasted Biden's avoidance of reporters who are mostly favorable to Biden with Trump's embrace of a press corps that was mostly hostile to Trump:

"Your viewers remember when he (Trump) walked out to get on Marine One, he would just do those impromptu conferences. He'd take every question, all questions. Sometimes he'd stay there for 30, 40 minutes. So, that's what the American people deserve,” Jordan said:

Instead, we get this -- this double standard. This idea they cover for -- you know, I think about what the press has done. When it was President Trump, it was kids in cages. Now, it's children in holding facilities, with -- the Democrats' defund the police, but now, they are putting more police around the Capitol.

I mean, even today, we heard about Biden's dog biting someone. Can you imagine if President Trump had a dog at the White House and had bit someone, the press would go crazy, they would say this dog is working with Russia and we got to have an investigation?

So I think the American people deserve to know who is making the decisions. They are also sick and tired of the double standard they see every single day from the mainstream press.

Meadows chimed in: "President Trump was more focused at 1:00 a.m. in the morning than Joe Biden is in the afternoon at 1:00 p.m.  I mean, you start to look at this and you say, at what point are we going to start to have real communication from the White House?”

Jordan said all Americans want, and even pray, for the president to be "healthy" and "well," "but we also have concerns," he said. "I'm nervous about what our adversaries may be thinking, what they may be up to, and let's hope we get some -- get some answers and some clarification as soon as possible."

White House Press Secretary Jen Psaki gave a flippant response on Monday, when a reporter asked her if the White house would commit to Biden giving a "formal press briefing" before the end of the month:

"So that is a commitment in the next few weeks we'll see him take questions and follow-ups and so forth?" the reporter asked.

"Yeah, he has done about 40 Q&As since he took office, but in terms of a formal press conference, which I understand there's a big focus on, yes, we will have one before the end of the month," Psaki said.

"And what does it mean going forward? Will we see more of President Biden, specific--" the reporter started to ask.

"Where he will be submitted to more extensive questions, follow-ups, the kind of things we're doing today, will we see him regularly?" the reporter asked.

"I don't know that you'll see him more than 40 times a month, but I'll have to--I'm happy to ask him that question," Psaki said, deliberately misunderstanding the reporter's question.

As for the "40 Q&As," Biden sometimes gives brief answers – or non-answers -- to questions shouted at him as he leaves the room.

Last week, Biden's video connection was cut off after he offered to take questions.

“And I’m happy to take questions if that’s what you — I’m supposed to do, Nance,” Biden told House Speaker Nancy Pelosi and other Democrats with whom he was meeting by video. “Whatever you want me to do.”

The feed ended immediately after that.