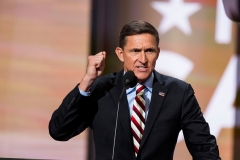 (CNSNews.com) - Sen. Chuck Grassley (R-Iowa), a senior member of the Judiciary Committee, said on Wednesday, "It's outrageous" the way Gen. Michael Flynn was treated by the FBI.

Grassley spoke on the day the Justice Department dropped the criminal case against Flynn, who was President Trump's first National Security Adviser.

Flynn pled guilty to lying to the FBI about his contacts with the Russian ambassador, but recently disclosed evidence shows the FBI went to Flynn's office four days after Trump's inauguration, hoping to trap Flynn in a lie. This happened after the FBI said it was prepared to close its counterintelligence case against Flynn because it had found no wrongdoing.

"First of all, he was entrapped," Grassley told Fox News's Brett Baier Thursday evening. "Entrapment is unconstitutional. It's a violation of your due process.

"Secondly, this thing would not be exposed if it hadn't been for (Attorney General William) Barr taking the bull by the horns and knowing something was wrong and going in and knowing where things were wrong, how to straighten it out.

"We haven't heard the end of Bill Barr's good work, because everything that's going on with the Durham investigation is another example of still other shoes to drop."

Baier asked Grassley if he thinks there are more "shoes to drop...that will shock Americans?"

The Justice Department's request to drop Flynn's case must be approved by a federal court in Washington.

"A lot of this looks like it just happened because Trump was president," Grassley said:

"Actually, I think there were people in the previous (Obama) administration after him because he knew what was going on inside the intelligence community and if he got to be national security advisor for President Trump, he would know where the bodies are buried and he would make big changes. And I think that they saw that as a real threat."

Grassley said a lot of people are telling him that the people who pursued Flynn should be prosecuted.

"And maybe there should be people prosecuted," Grassley agreed:

"But the most important thing about this is that a person has been given justice. In addition to his justice, the fact that we are getting all of this out that was previously held secret, so this doesn't happen to some innocent person in the future -- any American.

"If it can happen to a general, just think what can happen to the average citizen. So the exposure of this activity at the top of the FBI and even with collusion within the Justice Department, it's a good thing it's being exposed."

Grassley said he expects more incriminating evidence to emerge from John Durham's investigation-of-the-investigators in the "next two or three months."

The motion to dismiss the case against Flynn says, "The Government has determined, pursuant to the Principles of Federal Prosecution and based on an extensive review and careful consideration of the circumstances, that continued prosecution of this case would not serve the interests of justice."

The motion says the government concluded that the FBI interview of Gen. Flynn on Jan. 24, 2017 -- four days into the new Trump administration -- was "unjustified" because it happened after the FBI said it was prepared to close its counterintelligence investigation into Flynn because that investigation had "yielded an 'absence of any derogatory information.'"

The Government said it "is not persuaded that the January 24, 2017 interview was conducted with a legitimate investigative basis and therefore does not believe Mr. Flynn’s statements were material even if untrue. Moreover, we not believe that the Government can prove either the relevant false statements or their materiality beyond a reasonable doubt."