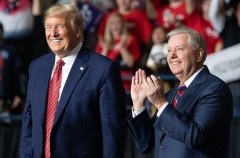 (CNSNews.com) - Sen. Lindsey Graham (R-S.C.) says it looks like the second impeachment of Donald Trump is "going forward," and he warned Senate Republicans, if they convict him, they do so at their peril.

I think it's unconstitutional, I think it continues to divide the country, I think it puts a cloud over the presidency, it will open up Pandora's box regarding the presidency itself, so I would like the Republican leadership to be more firm.

Mitch McConnell has been a good majority leader. He was indispensable to President Trump of not only doing judges but everything else that we did. He's a solid conservative, but I'm hoping that he will make an announcement soon saying that an impeachment under these circumstances is unwise and unconstitutional.

If this party is going to survive, we have to realize that Donald Trump had a consequential presidency for conservatives, that he's going to be the strongest voice in the party. I realize that and I appreciate that.

Fox News's Bret Baier noted that Senate Republican Leader Mitch McConnell has said that the storming of the U.S. Capitol was "provoked by the president."

Graham disagreed: "I think there's some things being said by the Trump campaign about the election that were wrong. 66,000 people under 18 did not vote in Georgia, there were not 8,000 felons voting in Arizona. This whole thing about the Dominion computer system was, to me, just way out there.

"But the people who broke into the Capitol are responsible for their actions. I'm not responsible. Trump's not responsible. If you think President Trump committed a crime, he can be prosecuted. Impeachment is a political exercise that will further divide the country and I think eventually destroy the presidency."

Graham said while McConnell has been "a good leader," he will be "giving some legitimacy to this impeachment process that I think is wrong. They impeached the president in the House in 24 hours, without a lawyer and without one witness. Now, is that what we're going to become as a country? I hope not."

Graham said he hopes Donald Trump will remain the leader of the Republican Party and not start one of his own.

Well, I hope he doesn't. I hope he'll stay the leader of the Republican Party.

If you're a conservative, this has been a good four years for judges, for rebuilding the military, for bringing order to the border, for historic peace agreements in the Mideast. This has been a consequential presidency, three Supreme Court justices.

I hope President Trump understands that his legacy and his best future lies with the Republican Party. I hope people in our party understand the party itself. If you're wanting to erase Donald Trump from the party, you're going to get erased.