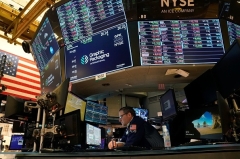 Traders work on the floor of the New York Stock Exchange at the opening bell on February 22 2022. (Photo by TIMOTHY A. CLARY/AFP via Getty Images)

(CNSNews.com) - President Biden's Fiscal Year 2023 budget includes a plan to make multi-millionaires and billionaires "pay their fair share" by taxing their unrealized capital gains -- money that hasn't even landed in their bank accounts because the stock, bond or other asset has not yet been sold to secure a capital gain.

Don't be fooled, several Republican lawmakers said on Tuesday: If the so-called billionaires' tax is implemented (and there are constitutional questions), it won't be long before the government lowers the threshold to include the unrealized capital gains of the not-so-super-wealthy.

"You are proposing to tax capital gains," Rep. Tom McClintock (R-Calif.) told a hearing of the House Budget Committee on Tuesday. "What is an unrealized capital gain? It's the paper increase in assets that you haven't cashed in on. It's a tax on money that you haven't received. But don't worry, they say, that's just on those worth $100 million or more.

"But once they've introduced this concept into law, how long will it take them to come after your pension funds' earnings before you've received them? You know, this whole mess isn't the fault of taxpayers for not paying enough taxes. It's the spending that is robbing families of their disposable income, their savings and their future economic growth."

"He wants the IRS to act as an appraiser. Now imagine that," Williams said. "Imagine the IRS acting as an appraiser and assigning taxable value to a variety of illiquid assets. I'm very concerned that this unconstitutional tax is being considered because it sets the precedent inserting a third party, which is the IRS, which hasn't had that good a record in the past on these issues."

Williams noted that "an appraisal value of something is irrelevant if there are no buyers willing to pay it. I know about that, because I'm in the car business."

"But what happens to those equities that are held in retirement -- as retirement securities, are those unrealized gains in that fund going to be taxed as well?"

OMB Director Shalanda Young was the witness: "No," she told Burgess. "We're not talking about that. We're talking about unrealized gains from stocks for the 700 people who are worth more than $100 million.

"For those 700 people, we are phasing in over five years for exactly the reason you talk about. We don't want to get into a situation where one year your stock may be worth $100 and you pay and then you come and ask for a refund when it's worth $80 the next year. So this is a phased-in approach for things you owned before this--"

"The tax code currently offers special treatment for the types of income that wealthy people enjoy. This special treatment, combined with sophisticated tax planning and giant loopholes, allows many of the very wealthiest people in the world to end up paying a lower tax rate on their full income than many middle-class households.

"To finally address this glaring problem, the Budget includes a 20 percent minimum tax on multi-millionaires and billionaires who so often pay indefensibly low tax rates. This minimum tax would apply only to the wealthiest 0.01 percent of households—those with more than $100 million—and over half the revenue would come from billionaires alone."