Garland: Increase in Fentanyl Trafficking 'Makes All of Us Very Worried' 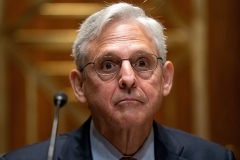 (CNSNews.com) - "I think all intelligence suggests that there will be a large increase (at) the border. Yes," Attorney General Merrick Garland told the Senate Judiciary Committee on Tuesday, when he was asked what might happen when Title 42, the public health, measure is lifted.

Sen. Lindsey Graham (R-S.C.) asked Garland, "When it comes to drugs coming into the United States from the southern border, in the last year, has that problem gotten better or worse?"

"I don't know what the numbers are," Garland said. "I mean, it is obviously the case that the -- the -- the transportation of fentanyl particularly has increased. Fentanyl is much easier -- it's much more compact, much smaller, goes a longer way.

"The smugglers, particularly in the trucks, have developed ways to hide it even from our x-rays. So that problem of fentanyl crossing the border -- border has definitely increased in a way that makes all of us very worried."

Graham asked Garland if the Justice Department's budget request "will be effective against this increase."

"I think that the budget that we've asked for, for drug trafficking and drug interdiction, which is $9.8 billion, is -- is -- is a huge amount and an enormous allocation of America's resources in this respect. But again, our job is different than the Department of Homeland Security's job. So I can't speak -- I can't speak to their resources."

Graham also asked Garland if he thinks the border is "in a state of crisis."

"I think as you rightly pointed out, there's going to be a lot of -- intelligence suggests there'll be a lot of people -- a lot more people migrating at the border," Garland said again, avoiding the word "crisis."

"And do you believe that what we have in place through this budget and the system as a whole, that we can expect to turn this around?" Graham asked again.

Garland said, "I think that the money, with respect to the Justice Department, which is the only thing I can speak to, I think that if you give us the increased resources that we're asking for, we can do our job."

The recently released National Drug Control Strategy says in the 12 months ending in October 2021, 105,752 people "are predicted to have died from a drug overdose." That's a 71 percent increase over the same time period in 2016. And it's the first time in the nation's history that the drug overdose toll has passed the "tragic milestone of 100,000 deaths.

Since 1999, drug overdoses have killed approximately 1 million Americans, the report says. "Synthetic opioids, including illicit fentanyl, has been involved in 66-percent of these overdose deaths."

Sen. Mike Braun (R-Ind.) told Garland the crisis at the border "has exploded beyond anybody's imagination, I think, self-induced. And then there are conflicting statements that part of it's due to not having enough resources. Are we resourced at the border properly...do we need to do something differently? And does your office need to be outspoken about trying to fix it?" Braun asked.

"I think most of the resources you're referring to are Department of Homeland Security resources. So I'll leave that for that Secretary to express what they need. But we have asked for $1.35 billion for our immigration courts, one billion of which is to reduce the immigration court backlog.

"So the thing is, that our job is to run the immigration courts after we get referrals from DHS. So we have already onboarded everyone we can as immigration judges. We asked in fiscal year '22 for 100 more. Again, no fault of this committee because you gave us the right mark, but as a consequence of the omnibus that was not funded.

"So we're asking for 200 new immigration judge teams, a total of 1,200 new staff for that purpose. That's the -- we've also asked for money for a virtual court initiative so that we can run these court proceedings more efficiently and more effectively and from whatever area. If we get the additional immigration judges, we will move them to the border. We're already going to be moving them to the border as it is."

Braun said, given the Biden-era surge at the southwest border, "I would advise maybe that might not be adequate, given the magnitude of the current problem."

"So that's a fair question, Senator," Garland replied. "Of course, we didn't get what we asked for the last time, so we're trying to be realistic about what we can ask for. But resources are not the only thing we're doing.

"We've also adopted a new asylum officer rule with DHS so that asylum decisions are made by the asylum officers not by the IJs -- IJs, immigration judges. So they won't have to do that. And then if there are denials, there'll be a streamlined process which should reduce the amount of time (to deportation) from current four years to six months."