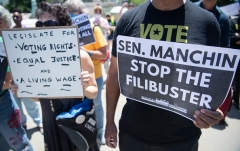 (CNSNews.com) - Because of Senate rules, Democrats were unable to pass their voting "rights" bill this week, so now more of them want to change the rules.

"The reality is that we don't have 60 votes in the United States Senate, and for so long as the filibuster rule continues to be the rule in the history of the Senate, then we're going to have a challenge on some of these big things.

"But I will say it takes two to tango," Menendez continued.

"So, if I invite you to do things, whether it's on infrastructure or voting rights and you basically say no, then it creates the impetus for some to consider what is necessary to be done to change the rules to permit maybe at least a democracy exception, because this is the very core of our government and how we proceed. And it affects all other things."

Tapper asked Menendez, "So you would support getting rid of the filibuster for an election reform bill exclusively, not just in general?"

"In the absence of any visible demonstration by Republicans to come to the table and broaden the scope of how we make the right to vote is enhanced, how do we get dark money out of our system, how do we ultimately have greater transparency in the funding of elections -- I would consider that," Menendez replied.

Sen. Bernie Sanders (I-Vt.) has urged an end to the Senate filibuster for months, long before Tuesday's procedural vote on the Senate bill relaxing voting rules.

He repeated himself on Wednesday in an interview with MSNBC's Andrea Mitchell:

I don't mean to be overly partisan, but it really is disgraceful that we did not have one Republican vote in helping us deal with the reality that in states all over this country, there is a concerted effort to deny African Americans, low income people, young people the right to vote. It's going on all over this country.

That is not what America is supposed to be about. We can disagree on education, on healthcare, on any other damn thing you'll want to disagree with, but you cannot disagree about whether or not all Americans have the right to vote, and that right is being taken away from them. That's what we're trying to deal with right now. We could not have one Republican vote.

So, to answer your question, in my view, should we end the filibuster on this issue? Absolutely. This is an enormously important issue. Democracy is at stake. Remember, we're dealing with a party where many of the leaders still are claiming, in the most fraudulent manner, that Donald Trump won the election. I mean, that's the kind of outrageous activity we're dealing with. We got to stand up to that.

Two Democrats, Sens. Joe Manchin and Kyrsten Sinema, have so far stood by their vows not to end the filibuster -- the 60-vote threshhold needed to proceed to debate on a bill.

"Andrea, I'm tired of talking about Mr. Manchin and Ms. Sinema," Sanders said. "You know, we have got to do what we can to bring people together. The American people, I think, all over this country understand that now is the time to act.

“And I will also tell you, you know, clearly, we are constrained by the fact that we only have 50 Democrats. And to my mind, what this next election is going to be about is whether the American people want us to have a government that represents all people that believes in democracy or not, and we need a hell of a lot more Democrats in the Senate that we have right now," Sanders said.

Indeed, Senate bill S.1 would give Democrats an electoral advantage over Republicans by making it easier for people to cheat in elections. S.1 would set federal rules for state-run elections, scrapping photo I.D. requirements for voters, expanding mail-in voting, and allowing vote harvesting, same-day voter registration, and many other "reforms" that would erase state-imposed safeguards.

Sanders told MSNBC there is no bipartisan compromise on S.1.

"If you know of any Republican who's prepared to vote to support democracy and voting rights, I would love to see them. There aren't any," Sanders said. "So, no, this is not going to be - unfortunately, and I say this with great sadness, this not going to be bipartisan. Unfortunately, Democrats are going to have to do it by themselves."

‘We are facing the need for filibuster reform’

Sen. Mazie Hirono (D-Hawaii) told CNN on Wednesday, "The best path forward is that if you don't have the Republicans and Democrats at least wanting to get on the (same) page in terms of protecting people's rights to vote, which is where the Democrats are, and the Republicans want nothing to do with it, where is the compromise there?"

"So I think as we go forward with this as well as so many other key issues that the American people want us to tackle and get done, we are facing the need for filibuster reform," Hirono said.

"And then to proceed with reconciliation as a way to get all of the other important things done, just as we had to do for the American Rescue Plan."

Hirono said she hopes Manchin and Sinema will change their minds about retaining the filibuster: "But in the meantime, there are votes coming up and the state legislative races, et cetera, because it is the state legislatures all across the country, sadly, that are enacting all of these voter suppression laws...So there's a lot that we need to be doing. And my hope is that we will be able to change the appropriate minds regarding filibuster reform.

"Unless we're going to wait around for the Republicans to suddenly decide that they actually should be protecting people's rights to vote as opposed to tearing away their rights to vote. What I call stealing our votes," Hirono said.

Senate Minority Leader Mitch McConnell (R-Ky.) and other Republicans say Democrats are the ones spreading a big lie about voter suppression.

So, they call it a voting rights bill, but here's what it is -- a partisan takeover of the Federal Election Commission which has been three/three for over half a century so that neither party can take advantage of each other.

The Federal Election Commission is the agency that kind of polices the political environment. So they want to turn that from a judge into a prosecutor, controlled by the president.

In addition to that, taxpayer funding of elections -- for all small donations you get, the government would send you six dollars. Well, my goodness, I think a candidate for the Senate in California would probably get a couple a hundred million dollars from the taxpayers to run -- an utterly outrageous proposal.

McConnell said politicians get plenty of money through contributions, "without having the taxpayers subsidize political campaigns, in effect buying ads for campaigns where they actually oppose the candidate."

He noted that S.1 would "prevent photo I.D. at the polls, something that 80 percent of Americans think is a very important part of verifying that the person who's voting is who they -- who he says he is.

It also would allow ballot harvesting, "you know, the ability of people to go around and collect ballots from others, presumably fill them in and turn them in. Just an utter disaster,"  McConnell said:

Look, the main point is, there's no need to federalize elections in this country. The Democrats have wanted to do it for years. They've wanted to take over the entire federal election system, and this bill would have done just that.

So, no one should be surprised that none of my members supported it and all of theirs did. That tells you they thought it would be to their advantage to rewrite the rules of the game in order to make it possible for them to win more often.

As for Democrat calls to scrap the filibuster, McConnell noted that he opposed such a move when President Donald Trump pressed him to get rid of it, "because I thought the institution of the Senate was more important than any short-term advantage of a majority that, may, tomorrow be in the minority."

I want to, you know, say to both Senator Manchin and Senator Sinema, I admire their -- the courage in defending the Senate as an institution, and, basically, I guess, saying you don't change the rules to try to win the game.

For them to win the game, they need to win more seats, and I've been here, Guy, when they did have 60. They had 60 the first two years of President Obama, they could do pretty much what they wanted to do, and they did.

Well, they don't have 60 now. They don't have a mandate. And breaking the rules of the Senate to achieve a short-term partisan advantage is bad for America, bad for the Senate, and shouldn't be done. And hopefully, thanks to these two courageous Democratic senators, it won't be done.