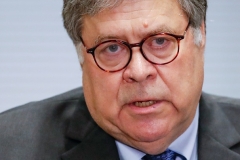 (CNSNews.com) - A federal jury in Washington, D.C. -- a jury that included Hillary Clinton donors and supporters -- on Tuesday acquitted Washington attorney Michael Sussmann on a charge of lying to the FBI in 2016 about his actions on behalf of the Hillary Clinton campaign.

The case was prosecuted by Special Counsel John Durham, who was asked three years ago by then-Attorney General Bill Barr to investigate the origins of the Trump-Russia "hoax," as President Donald Trump called it.

Barr on Wednesday praised Durham for doing "an exceptionally able job, both digging out very important facts and presenting a compelling case to the jury."

Barr told Fox News's Jesse Waters on Wednesday that although Durham did not persuade a D.C. jury to convict Sussmann, "I think he accomplished something far more important, which is he brought out the truth in two important areas.

“First, I think he crystallized the central role played by the Hillary campaign in launching as a dirty trick. The whole Russia gate collusion narrative and fanning the flames of it.

“And second, I think he exposed really dreadful behavior by the supervisors in the FBI, the senior ranks of the FBI, who knowingly used this information to start an investigation of Trump and then duped their own agents by lying to them and refusing to tell them what the real source of that information was. And that was appalling.

"I am a little tired of voices, you know, saying, these people belong in jail, why aren't they in jail, get them in jail, what this episode should remind us about is that we don't just throw people in jail, and the attorney general does not have the power to throw people in jail because the attorney general believes, even with high degree of confidence, that people have acted improperly, he has to prove his case beyond a reasonable doubt before a jury.

“And in government cases, that means a D.C. jury, which is a very favorable jury for anyone named Clinton and the Clinton campaign. Those are the facts of life, and to get mad at law enforcement people because proving these cases beyond a reasonable doubt is difficult work --it's childish.”

As alleged in the indictment, Sussmann went to the FBI with information that supposedly showed a secret communications channel between the Trump Organization and a Russia-based bank. Sussmann "falsely stated" to the FBI general counsel that he was not acting on behalf of any client.

"In fact," the indictment alleged, "Sussmann assembled and conveyed the allegations to the FBI on behalf of at least two clients, including a U.S. technology executive and the Clinton Presidential Campaign."

Barr told Jesse Waters that the verdict is frustrating, especially to law enforcement officials who are "trying to uphold the law."

"There are two standards of the law. And we've had to struggle with that," Barr said. "And people have done, I think, a very good job trying to develop this case in the face of very strong headwinds.

“And part of this operation is to try to get the real story out. And I've said from the beginning, if we can get convictions, if they're achievable, then John Durham will achieve them," Barr said.

"But the other aspect of this is to get the story out. And I think that Danchenko prosecution is going to further amplify these themes and the role that the FBI leadership played in this, which is increasingly looking fishy and inexplicable."

Danchecko, Barr explained, "is the Russian who was the conduit for all the information that made it into the dossier that was then used by the FBI to get the FISA warrant and to prosecute its investigation against Trump, even after he became President of the United States -- and at a time when the veracity of that dossier was falling apart. And the FBI was aware that the primary source of it, they had suspected of being a Russian intelligence agent.

"So, the prospect that this was Russian disinformation fed through Hillary's campaign is very real, and was never looked into by Mueller, even though he had all the relevant facts."

Barr noted that "complicated cases like this take a long time to build," and they happen in secret. But there is more to come, he indicated.