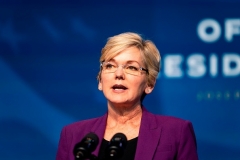 Jennifer Granholm is introduced as President-elect Joe Biden's nominee to be the next Energy Secretary on December 19, 2020 in Wilmington, Delaware. (Photo by ALEX EDELMAN/AFP via Getty Images)

"I am so excited about this, George, because this -- combating climate change is such an economic opportunity for this country," Granholm told host George Stephanopoulos:

We could be producing that material, those products here in the United States, and stamping them made in America and exporting them around the country. We need to be the leader, rather than passive bystanders. Or otherwise, we're going to allow other countries, like China and others who are fighting to be able to corner this market.

So, Joe Biden's focus has been, obviously, on climate change and taking advantage of the economic opportunity for our people to be able to build the products that help America to lead.

And I will say one other thing. He's very focused as well on making sure that the benefits of fighting climate change, the jobs, are focused on the communities that have been hardest hit by environmental pollution, for example, or that are the poorest communities.

So, both environmental equity, the equity associated with energy opportunity, and creating jobs for Americans, that is going to be the mission of the Department of Energy, in addition to the great work that they already do.

As stated by his campaign, President-elect Joe Biden will ensure the U.S. achieves a 100 percent clean energy economy and net-zero emissions no later than 2050.

As part of that plan, he will "demand" that Congress enact legislation in the first year of his presidency that: 1) establishes an enforcement mechanism that includes milestone targets..."

Stephanopoulos asked Granholm, "Is that a realistic goal? And what would the enforcement mechanism look like? What it would mean in our daily lives?"

"First of all, it is realistic. It is ambitious," Granholm said.

So, for example, yesterday, as part of our team, one of the people who was nominated was Deb Haaland, who is going to be the first Native American who is in the Cabinet, which is awesome.

The Department of Interior oversees a massive amount of public land. That public land could be used to make sure that we generate clean electricity by putting wind -- wind turbines, including offshore, as well as onshore, solar panels, et cetera, that those jobs and that electricity, there is going to have to be a significant sort of hair-on-fire effort inside the administration to get it in the ground to meet that goal.

And we want to make sure that we are acting in a way that allows us to be a leader across the planet. And so we're going to hold ourselves accountable.

And I will say this, too. As a governor, this was something I focused on as governor of Michigan, and a lot of governors and mayors are focusing on how they can contribute to make sure that they meet the Paris Climate Accord.

So, we're going to be working at the Department of Energy with the local and sub-national, as they call it units, the states and the cities, to help give them incentives -- little carrots, little sticks.

The EPA often is the place that people turn to for sticks. But the Department of Energy is going to be working with all of this -- the whole of government effort to make sure we combat climate change in a fair and equitable way, and create jobs in the process.

She didn't answer the question, nor did she explain the "little carrots, little sticks" that may be used on states and cities.

Granholm said the Green New Deal is "an important framework" for Biden's plan, and she called Biden's plan "the most robust climate change plan ever."

According to his campaign website, the Biden Plan will:

Ensure the U.S. achieves a 100% clean energy economy and reaches net-zero emissions no later than 2050.

"On day one, Biden will sign a series of new executive orders with unprecedented reach that go well beyond the Obama-Biden Administration platform and put us on the right track.

"And, he will demand that Congress enacts legislation in the first year of his presidency that: 1) establishes an enforcement mechanism that includes milestone targets no later than the end of his first term in 2025, 2) makes a historic investment in clean energy and climate research and innovation, 3) incentivizes the rapid deployment of clean energy innovations across the economy, especially in communities most impacted by climate change."

Biden has promised to:

--Make smart infrastructure investments to rebuild the nation and ensure that our buildings, water, transportation, and energy infrastructure can withstand the impacts of climate change.

-- Rally the rest of the world to meet the threat of climate change.

-- Stand up to the abuse of power by polluters who disproportionately harm communities of color and low-income communities.

-- Fulfill our obligation to workers and communities who powered our industrial revolution and subsequent decades of economic growth...We’re not going to leave any workers or communities behind.