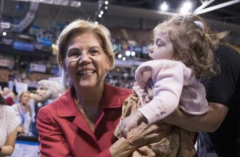 (CNSNews.com) - Childcare is "infrastructure for families," because "nobody makes it on their own," Sen. Elizabeth Warren (D-Mass.) told the Democrat National Convention Wednesday night.

Speaking from an early childhood education center in Springfield, Mass. -- a center closed by the pandemic -- Warren noted that "parents are stuck," not knowing when schools can safely reopen and left with even fewer child care options.

And here’s why that’s wrong: We build infrastructure like roads, bridges and communications systems so that people can work. That infrastructure helps us all because it keeps our economy going.

It’s time to recognize that childcare is part of the basic infrastructure of this nation--it’s infrastructure for families. Joe and Kamala will make high-quality child care affordable for every family, make preschool universal, and raise the wages for every child care worker.

That’s just one plan, but it gives you an idea of how we get this country working for everyone.

Warren, in her brief speech, mentioned several other Biden-Harris plans:

"I love a good plan, and Joe Biden has some really good plans -- plans to bring back union jobs in manufacturing and create new union jobs in clean energy. Plans to increase Social Security benefits, cancel billions in student loan debt, and make our bankruptcy laws work for families instead of the creditors who cheat them.

"These plans reflect a central truth: our economic system has been rigged to give bailouts to billionaires and kick dirt in the face of everyone else. But we can build a thriving economy by investing in families and fixing what’s broken. Joe’s plan to “build back better” includes making the wealthy pay their fair share, holding corporations accountable, repairing racial inequities, and fighting corruption in Washington," Warren said.

Like so many of her fellow Democrats, Warren wants to change America, and she used those words at the end of her speech:

"We stay in this fight so that when our children and our grandchildren ask what we did during this dark chapter in our nation’s history, we will be able to look them squarely in the eye and say: we organized, we persisted, and we changed America."