Durbin: Dems Issue a 'Good Faith Invitation' for GOP to Join Them in Gun Control 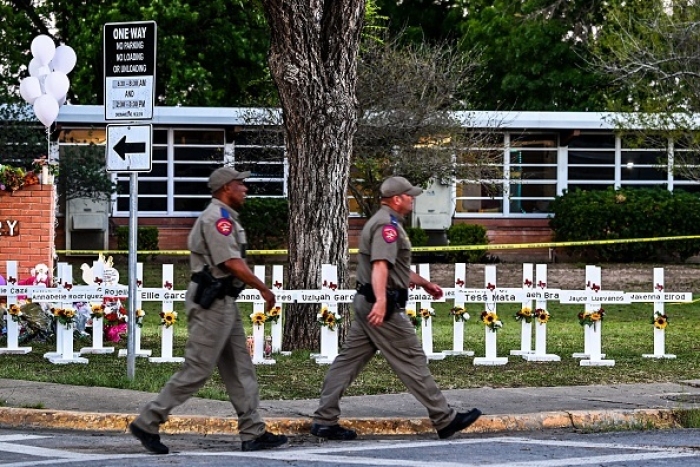 Police officers pass a makeshift memorial for the children shot in their classroom at Robb Elementary School in Uvalde, Texas, on May 26, 2022. (Photo by CHANDAN KHANNA/AFP via Getty Images)

(CNSNews.com) - Sen. Dick Durbin (D-Ill.) says Senate Democrats have issued a "good faith invitation" for Republicans to join them in a conversation about gun control.

"The big question is this," Durbin told CNN's "New Day" on Thursday: "Is Uvalde, Texas the tipping point? Is this what we've been waiting for? We've had so many opportunities. We look at the high school in Florida, we look at the grade school in Connecticut. And you think, that was it, that's the one, that is so outrageous, we cannot fail to do something in response.

"We did fail. My question is, is Texas any different? I hope, in this respect, I hope it is. I hope it motivates all of us to sit down and be honest with one another of what we can achieve as a nation."

Durbin said conversations about red flag laws and background checks are the "obvious" conversations to be had. "They come through time and again when these mass shootings take place, he said, adding that "there are other elements" to be discussed.

(He didn't say it, but "other approaches" likely include an "assault" weapons ban, which is something Durbin supports.)

Durbin said there is a "genuine effort for conversation may lead to something positive. I'm keeping an open mind. I'm reading some Republican bills that have been rejected before and saying, well, is there a germ of possibility here, where we can really move to something that gives parents and families across America a sense of security?" He refused to say which Republican bills he is reading.

"This is going to be a painful process, slower than it should be, but I hope it's a good faith process and I hope that some Republicans will join us publicly, saying they're willing to try."

Both of those bills have passed the House.

H.R. 1446 would increase the amount of time, from 3 business days to a minimum of 10 business days, that a federal firearms licensee must wait to receive a completed background check prior to transferring a firearm to an unlicensed person.

Federal law already requires all FFLs to do background checks before transferring a firearm to a non-dealer, regardless of where the transfer takes place. Background checks for firearms have been conducted through the National Instant Criminal Background Check System (NICS) since November 1998.

But the National Rifle Association does oppose the two Democrat bills.

"H.R. 8 is being misleadingly described as simply requiring background checks on all sales of firearms, but this is just a small part of what these overbroad pieces of legislation would do," the NRA's lobbying arm said.

"The bill would make it a crime, subject to certain exceptions, to simply hand a firearm to another person. Any time gun owners carry out this simple act, they would potentially be exposing themselves to criminal penalties. While the bill does create some exceptions, they are overly complicated and create many traps for unwary gun owners. Accidental violations of these complicated provisions are not excused under the proposed legislation."

The NRA further notes that criminals are not deterred by background checks; and FFLs who do the private transfers "could charge high fees or refuse to participate altogether."

The NRA also objects to anything that would set the stage for a national gun registry, another goal of gun control activists:

"As an advisor to the Obama administration wrote, the effectiveness of a universal background regime 'depends on … requiring gun registration…;' this bill weakens protections against using NICS checks to create a registry and sets the stage for future firearm registration requirements," the NRA said.