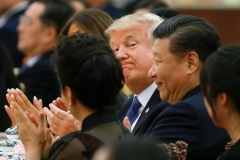 President Donald Trump and China's President Xi Jinping attend a state dinner at the Great Hall of the People in Beijing on November 9, 2017. Since then, relations have soured.(Photo by THOMAS PETER/AFP via Getty Images)

(CNSNews.com) - "I'm privileged to see more intelligence than anyone else in the country, other than the president. That includes all members of Congress," Director of National Intelligence John Ratcliffe told Fox News's Maria Bartiromo, host of "Sunday Morning Futures."

"China is the greatest threat that we face," he said, "economically, militarily, technologically."

And when it comes to the upcoming election, “China is using a massive and sophisticated influence campaign that dwarfs anything that any other country is doing,” Ratcliffe said.

"I don't mean to minimize Russia. They are a serious national security threat, but day in, day out, the threats that we face from China are significantly greater."

Bartiromo asked Ratcliffe, "What can you tell us about China and what they're trying to do in this election?"

Well, in an unclassified setting, I can't get into a whole lot of details, other than to say that China is using a massive and sophisticated influence campaign that dwarfs anything that any other country is doing.

Listen, first, when we talk about election security, I want to reassure the American people, it would be difficult for anyone, China, Russia, Iran, to change actual vote tallies. We have a decentralized system across this country about counting votes.

But when we talk about influence and malign foreign influence, what China's doing that no one else is doing is, they're engaging at the local, state and federal level. Beijing is threatening economic ruin in, for instance, districts where members of Congress are, threatening ruin to businesses, factories and jobs, unless members of Congress support pro-China policies or oppose policies of the administration, of this administration, that are tough on China.

So, that's the kind of influence, malign influence, that China is exerting on a level that no other country is matching. And it's something that should concern every American.

Ratcliffe said China isn't the only one -- Russia, Iran, and other "actors" also are trying to influence U.S. elections for their own gain:

So, I don't want to say this is only about China. But China, again, as someone that sees more intelligence than anyone, is the greatest threat to American superiority, economically, militarily, technologically.

China's enjoyed a $500 billion annual trade surplus that -- that the president won't tolerate. And so those are one of the reasons that China is doing the things that they do.

Ratcliffe said one difference between China and Russia is, "Russia wants a seat at the table of the international order. China wants to sit at the head of the table.”

China has a plan, through the Belt and Road Initiative, the made-in-China Initiative, the Thousand Talents program, military-civil fusion laws that require companies to spy for the government through 5G and Huawei -- all of that is designed to challenge U.S. superiority in every respect, and to sit at the head of the table, and really set the rules and standards and norms for international -- in the international marketplace.

And, obviously, you know, we're talking about the Chinese Communist Party that is, you know, at the center -- puts the government at the center of every decision, sets aside personal liberty and freedoms, violates human right, all in the name, supposedly, of the collective good.

All of that is anathema to American values of personal freedom and liberty. And it's something that we should all be concerned about. And, again, the intelligence community warns of that threat. And people that see the intelligence knows that that is the threat.

Ratcliffe infuriated Democrats over the weekend when he announced that the intelligence community would no longer give in-person briefings to members of Congress:

"The ODNI will primarily meet its obligation to keep Congress fully and currently informed leading into the Presidential election through written finished intelligence products," Ratcliffe wrote in a letter to leaders of the Senate intelligence committee.

"I believe this approach helps ensure, to the maximum extent possible, that the information ODNI provides the Congress in support of your oversight responsibilities on elections security, foreign malign influence, and election interference is not misunderstood nor politicized."

Ratcliffe told Bartiromo that during his confirmation,  he made two promises -- to obey the law and to prevent the unauthorized disclosure of classified information.

The action that I announced yesterday is entirely consistent with that. I reiterated to Congress, look, I'm going to keep you fully and currently informed, as required by the law. But I also said, we're not going to do a repeat of what happened a month ago, when I did more than what was required, at the request of Congress, to brief not just the Oversight Committees, but every member of Congress.

When I did that, Maria, I said, my only condition is that you treat this information with the respect that it deserves, and you keep it private.

And yet, within minutes of that -- one of those briefings ending, a number of members of Congress went to a number of different publications and leaked classified information, again, for political purposes, to create a narrative that simply isn't true, that somehow Russia is a greater national security threat than China.