DHS Secretary Reacts to SCOTUS Order: 'The Border Is Not Open' 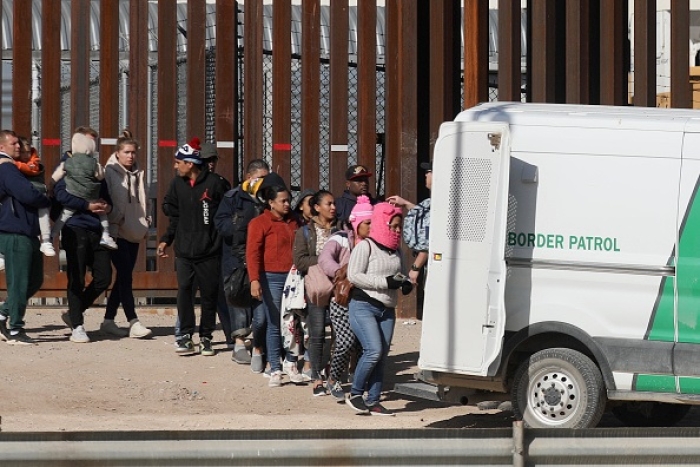 Venezuelan and Nicaraguan migrants are transferred by agents of the Border Patrol after crossing the Rio Grande river from Ciudad Juarez, Mexico to El Paso, Texas, to ask for political asylum on December 27, 2022. (Photo by HERIKA MARTINEZ/AFP via Getty Images)

(CNSNews.com) - "The border is not open," and "we will continue to manage the border," Homeland Security Secretary Alejandro Mayorkas said in a written statement on Tuesday.

He was reacting to the Supreme Court's order keeping Title 42 in place -- at least until the court hears oral arguments in February on whether the states may intervene and challenge a lower-court ruling lifting Title 42.

"As required by today’s Supreme Court order, the Title 42 public health order will remain in effect, and individuals who attempt to enter the United States unlawfully will continue to be expelled to Mexico or their home country," Mayorkas said in the brief statement.

"People should not listen to the lies of smugglers who take advantage of vulnerable migrants, putting lives at risk. The border is not open, and we will continue to fully enforce our immigration laws.

"We will continue to manage the border, but we do so within the constraints of a decades-old immigration system that everyone agrees is broken. We need Congress to pass the comprehensive immigration reform legislation President Biden proposed the day he took office."

Photographs and video recorded at the Texas border continue to show hundreds of illegal border-crossers overwhelming U.S. shelters, even sleeping on the cold streets of El Paso. They are free to move across the U.S., and thousands have taken buses to northern cities.

President Joe Biden has not visited the border and he rarely comments on it, unless asked, as he was earlier this month, when he told reporters, "There are more important things going on."

Biden is now vacationing in the Virgin Islands, but his spokeswoman Karine Jean-Pierre put out the following statement on Tuesday:

"The Supreme Court’s order today keeps the current Title 42 policy in place while the Court reviews the matter in 2023.  We will, of course, comply with the order and prepare for the Court’s review.

"At the same time, we are advancing our preparations to manage the border in a secure, orderly, and humane way when Title 42 eventually lifts and will continue expanding legal pathways for immigration.

"Title 42 is a public health measure, not an immigration enforcement measure, and it should not be extended indefinitely. To truly fix our broken immigration system, we need Congress to pass comprehensive immigration reform measures like the ones President Biden proposed on his first day in office.

"Today’s order gives Republicans in Congress plenty of time to move past political finger-pointing and join their Democratic colleagues in solving the challenge at our border by passing the comprehensive reform measures and delivering the additional funds for border security that President Biden has requested."

Biden came into office promising to welcome asylum-seekers and create legal pathways to citizenship for people who arrived here illegally.