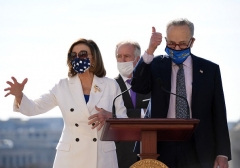 Speaker of the House Nancy Pelosi and Senate Majority Leader Chuck Schumer will use gimmicks in an attempt to pass federal election rules that all Republicans reject as an erosion of voter integrity. (Photo by OLIVIER DOULIERY/AFP via Getty Images)

(CNSNews.com) - Democrats are accelerating their partisan effort to ram through federal election rules without a single Republican vote.

President Joe Biden will go to Capitol Hill today to urge Senate Democrats to pass legislation that would set federal rules for state-run elections. The federal rules would weaken election safeguards, including voter I.D., passed by a number of Republican-run states.

Biden, formerly a defender of the filibuster, now wants Democrats to find a way around the 60-vote rule to pass the bill.

Biden's visit to Capitol Hill on Thursday follows a move by the House of Representatives to use a "shell" bill (H.R. 5746, the NASA Enhanced Use Leasing Extension Act of 2021) to consolidate two bills House Democrats previously passed: The John Lewis Voting Rights Advancement Act and The Freedom to Vote Act.

The consolidated bill will come to the Senate as a "message," press reports said, something that will allow Senate Democrats to open debate on voting "rights" without giving Republicans an opportunity to filibuster.

However, Republicans could filibuster a motion to end debate on the bill, which Senate Majority Leader Chuck Schumer (D-N.Y.) wants to pass on Monday, the federal holiday honoring Dr. Martin Luther King, Jr.

When the Republicans filibuster the motion to end debate, as they surely will, Schumer is expected to move to change or scrap the 60-vote filibuster rule, something Democrat Senators Joe Manchin and Kyrsten Sinema still say they oppose.

In a tweet on Wednesday, Schumer wrote: "Now is the time for all of us to follow John Lewis' example. Now is the time for the U.S. Senate to do the right thing." Schumer also thanked President Obama, who has joined the Democrat push to impose (weakened) voting rules for the states.

[E]ven if Senate Republicans now refuse to stand up for our democracy, Democrats should be able to get the job done with a simple majority vote. There are already 50 Senators who support bills to safeguard elections. The only thing standing in the way is the filibuster – a Senate procedure that allows a minority of just 41 Senators to prevent legislation from being brought up for a vote.

The filibuster has no basis in the Constitution. Historically, the parliamentary tactic was used sparingly – most notably by Southern senators to block civil rights legislation and prop up Jim Crow. In recent years, the filibuster became a routine way for the Senate minority to block important progress on issues supported by the majority of voters. But we can’t allow it to be used to block efforts to protect our democracy.

That’s why I fully support President Joe Biden’s call to modify Senate rules as necessary to make sure pending voting rights legislation gets called for a vote. And every American who cares about the survival of our most cherished institutions should support the president’s call as well.

The final paragraph in Obama's op-ed suggests that passage of the Democrat voting bill will help Democrats achieve more of their big-government, leftist agenda:

"No single piece of legislation can guarantee that we’ll make progress on every challenge we face as a nation," Obama wrote. "But legislation that ensures the right to vote and makes sure every vote is properly counted will give us a better chance of meeting those challenges.

"It’s how we can overcome the gridlock and cynicism that’s so prevalent right now. It’s how we can stop climate change, and reform our broken immigration system, and help ensure that our children enjoy an economy that works for everyone and not just the few."