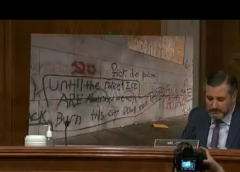 Sen. Ted Cruz displays some of the vandalism by "peaceful" protesters in Portland, Oregon at a Senate hearing on Aug. 4, 2020. (Photo: Screen capture)

"Peaceful protests must be protected. Riots must be stopped. No one has a right to assault another person, to firebomb a building, to throw a Molotov cocktail into a police car. That's not exercising a constitutional right. That is terrorizing your fellow citizens."

Cruz, the subcommittee chairman, noted that "a significant portion" of the violence is not random or spontaneous. "Rather, it is coordinated and inspired by leftist, anarchist groups, groups like Antifa, that will, without shame, exploit a national tragedy (the George Floyd killing) to attack American buildings, American homes, and American lives."

Cruz described some of the violence erupting across the country, "nowhere more so than in Portland, Oregon," Cruz noted.

"In Portland, Antifa and other radicals have thrown metal pipes at DHS officers and used commercial-grade lasers to try to blind them, perhaps permanently. They launched mortar-style attacks with commercial grade fireworks; they firebombed a federal courthouse. This is not peaceful protest. This violence speaks for itself."

Cruz noted that graffiti sprayed on a courthouse in Portland says, "'Until the police and ICE are abolished, we will burn this city down piece by piece.' They are telling us what their demands are -- to shut down and abolish the police."

Cruz said such violence should be universally condemned. "All 100 senators ought to come together and say, don't murder your fellow citizens, don't attack police officers. Protect each other's rights."

However, at the same hearing, a number of Democrats, including Sen. Mazie Hirono (D-Hawaii), Ron Wyden and Jeff Merkley (both D-Oregon), stood up for the "peaceful" protesters, condemning federal law enforcement officers (Trump’s “secret police”) instead.

Cruz said too many local officials also have decided it is in their political interest to ignore the violence by protesters and the nightly attacks on law enforcement officers. Even worse, Cruz said, is the demonization of police officers by those throwing out terms such as "stormtroopers" (Speaker Nancy Pelosi) and "gestapo" (Rep. James Clyburn) to describe federal law enforcement officers doing their jobs.

"It's for that reason that I've introduced legislation called the Reclaim Act. The Reclaim Act provides that if you, as an American, if you are injured, if your property is damaged, if your home is burned to the ground, if your business is looted and destroyed during a riot, as a result of a decision of political leaders to deny you police protection, that you have a federal cause of action to sue the municipality or the city that has denied you police protection and has willfully looked the other way while your life was endangered, while your home or business was burned to the ground.

"Denying fair protection of law enforcement is a civil rights violation for any American who is denied," Cruz added.

Sen. Mazie Hirono told the subcommittee the hearing should be called "The right of the people peaceably to assemble without being beaten up by unidentifiable federal agents."

She accused federal agents in Portland of using "excessive and indiscriminate force to break up people gathered to peaceably protest." And she criticized the focus on "anarchist violence," instead of "white supremacists" who "have hijacked peaceful protests to invoke conflict."

Sen. Ron Wyden, a Portlander, asked who Americans believe is the real threat to their constitutional rights:

"Is it the Oregonians who gathered in my hometown in overwhelmingly peaceful protests against racial injustice since the murder of George Floyd? Or is it the heavily armed secret police who snatched Portlanders off the streets into unmarked vans and interrogated them without justification or charges?”

Sen. Jeff Merkley (R-Oregon) agreed that shortly after George Floyd's death, angry protesters did cause "some substantial destruction," but that had disappeared by the time federal police arrived and stirred things up.

"I never thought an American president would bring such tactics to the streets of America, but Trump has. So we should pass a "no secret police in America" act to end it, if we want to protect peaceful assembly in the United States of America.

Merkley named some of the peaceful protesters who, he said, are not anarchists: "Day after day, week after week, these Americans inspire me," and they should inspire you," Merkely said. "Have there been incidents of violence and destruction by a few? Yes. And I don't condone vandalism, and I condemn threatening harm to anyone else."

But, he added, "Trump's forces did not arrest a violent few, they attacked the peaceful many."

In a tweet on Wednesday morning, President Trump wrote:

There is TREMENDOUS Lawlessness in America’s Liberal Cities. Would be so easy to stop but they have a clouded vision of what should be done. They are indoctrinated with a philosophy which will never work, a philosophy which would destroy America. Portland would be the norm!