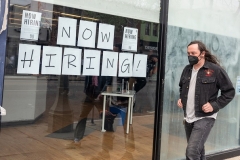 (CNSNews.com) - Speaking about the disappointing April jobs report, Commerce Secretary Gina Raimondo said, "I think we have a long way to go to recover from the pandemic."

She told CBS's "Face the Nation" on Sunday that there is "anecdotal evidence" but "nothing in the data" to suggest that higher unemployment benefits, passed by Congress as part of COVID relief, are hurting the job market.

Host John Dickerson told Raimondo, that "a lot of people" believe people are staying on unemployment because it pays them more than working would. "Is there any discussion within the administration about tweaking that or doing anything to remove that as a barrier to jobs?" he asked her.

"Obviously, we are monitoring that, but, at this point, there's nothing in the data which would suggest that that's the reason people are out of work," Raimondo said.

By the way, we have to remember that, when the president moved to make this happen, this unemployment insurance has been a lifeline, a survival lifeline for so many Americans. The number one reason now that people aren't going back to work is what you said, fear, or they can't find childcare or schools are still closed.

So, we'll monitor it as necessary. But, right now, we don't think that's the reason people aren't able to go back to work.

Dickerson noted that the governors of South Carolina and Montana are scaling back or opting out of the expanded unemployment benefits to encourage a return to the workplace.

By the way, this is regional, and it's appropriate that governors in different regions would respond to what's going on in their regional labor market. But if you look nationally, wages aren't going up. People are still telling us the number one reason they're not going back to work is fear due to the virus.

And more people were looking for work last month than the month before. So, we are -- I am engaged with businesses constantly, listening, monitoring. But at the moment, it doesn't seem to be that that's the major impediment.

"So, first of all, women are clustered in the industries that were hit the most, the lower-skilled service jobs, waitresses, working in hotels. And we all know that those industries were hit the hardest. So women were put out of work in greater numbers.

"But the reality is, as you say, women are more likely to be the caretakers. So, lack of affordable childcare hits women the hardest. The fact that schools were closed and many still remain closed hits women harder."