Comer: 'We've Never Had a Family That Has Influence-Peddled to This Degree' 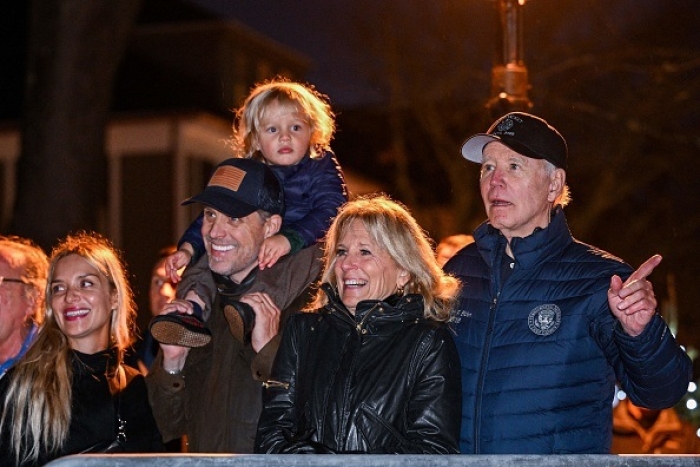 President Joe Biden's son Hunter is frequently seen with his family at official and unofficial events, including this Christmas tree lighting in Nantucket on Nov. 25. (Photo by MANDEL NGAN/AFP via Getty Images)

(CNSNews.com) - "There's nothing like it in the history of America. We've never had a family that has influence-pedaled to this degree," Rep. James Comer (R-Ky.), said on Monday.

He was talking to Fox News's Sean Hannity about the millions of dollars the Biden family received, through Hunter Biden, from foreign adversaries of the United States.

Comer, the incoming chairman of the House Oversight and Reform Committee, also broke some news on Hannity's show:

"So, Sean, I'm breaking on your show tonight, based on the internal documents that Elon Musk released this weekend, the Oversight Committee will be sending a letter tomorrow morning to the three Twitter employees -- Miss Gadde, Roth, and Baker -- that were implicated in the cover-up of the laptop story, three letters requesting their presence in front of the Oversight Committee in January."

Comer said he intends to ask the three former Twitter officials -- Vijaya Gadde, Yoel Roth and attorney James Baker -- "who was influencing your decision-making? Did you do this unilaterally or did you do this based on what you were told from the Biden campaign, from the Democrat National Committee, or even worse -- and as I suspect -- from the FBI?

"This is going to be an opportunity for the American people to hear directly from the three Twitter employees implicated in the data release that Elon Musk just dumped this weekend.

"So they're going to have a few weeks to get their stories straight, and they're going to be able to come under oath in front of the House Oversight Committee and tell the American people what really happened and why -- why were they so intent on suppressing this story?"

The information that Elon Musk released this past weekend to journalist Matt Taibbi says Twitter took “extraordinary steps to suppress" the Hunter Biden laptop story, “removing links and posting warnings that it may be 'unsafe.' They even blocked its transmission via direct message, a tool hitherto reserved for extreme cases, e.g. child pornography."

The Twitter executives said the laptop story had been removed for violation of the company’s “hacked materials” policy, although there was no evidence that the story, published shortly before the 2020 election by The New York Post, was based on "hacked" information.

Comer said the purpose of his committee's investigation is "to determine whether or not this White House is compromised."

"When you look at all the bad policies coming out of this White House, especially with respect to things like energy policy and the fact that Biden is trying to embrace the green new deal. Who wants the green new deal more than anyone other than a few liberals in California? China. They want to put us at a competitive disadvantage.

"So a lot of bad decisions this administration is making, maybe because they're compromised because of the millions of dollars that they received through influence pedaling from our adversaries in China, Russia and the Middle East.

“That's why we're investigating the Biden family, and that's why we're going to kick it into high gear in January with subpoena power and the gavel."