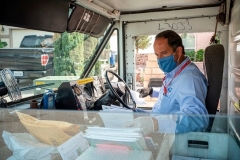 (CNSNews.com) – “Why is President Trump trying to prevent Americans from exercising their right to vote, if they choose to vote this way (by mail), especially during a pandemic?" CNN's Jake Tapper asked White House Chief of Staff Marks Meadows on Sunday.

Meadows repeated what Trump has said, that the mass mailing of ballots to millions of registered voters leads to problems, including the possibility that the ballots will be sent to places where the voter no longer lives, or they may be lost, stolen, forgotten in a corner, or delayed by an over-taxed postal service.

"Well, the president doesn't have a problem with anybody voting by mail, if you would look at it in terms of maybe a no-excuse absentee ballot," Meadows said.

What he opposes is universal mail-in ballots, where you send millions of ballots out to registered voters across the country, even those that don't request it.

You know, I have worked a number of times at a precinct, and I know how those rolls are not accurate. People move. People die. And yet, when we're going to send out ballots all across the country, that's not just the -- asking for a disaster. It really is knowing that what you're sending out is -- is inaccurate.

So, that's the problem he has with it. From a no-excuse absentee, being able to mail in your ballots, I think the president actually has already requested an absentee ballot for Florida, where he will be casting his ballot in that manner.

We want to make sure that every vote counts, but that only one vote counts. And so, when you look at that, this debate is really over a process. A number of states are now trying to figure out how they're going to go to universal mail-in ballots. That's a disaster, where we won't know the election results on November 3, and we might not know it for months.

And, for me, that's problematic, because the Constitution says that then Nancy Pelosi and the House would actually pick the president on January 20. So, we need to make sure that we do it right.

Tapper tried again later, repeating the Democrat talking point: "Now I don't understand why the president wants to block funding for the post office in order to prevent people from voting. That doesn't seem fair or right or leading -- it doesn't seem like it is going to instill a lot of confidence among voters that their ballots are going to be counted."

"Well, let me -- let me just stop you right there," Meadows said.

"The funding in terms of stopping voting is not accurate. Louis DeJoy, the postmaster general, sent out a notice to these states that said, listen, if you have got a tight time frame, you may want to look at adjusting that, because even the post office's guaranteed two-day mail is not guaranteed to get there in two days.

Meadows said Democrats have seized on Trump's objections to universal mail-in voting because they think it is "to their political advantage."

Meadows also said no mail-sorting machines are going offline between now and the election:

"That's something that my Democrat friends are trying to do to stoke fear out there. That's not happening. I can tell you that the sorting machines -- listen, the volume of first-class mail that they have at the postal system right now, we haven't seen that volume since I was 17 years old. It's not a volume problem. What this is, is a political narrative by my Democrat colleagues."

President Trump has said if no deal is made, it means Democrats don't get universal mail-in voting. He also said Democrats themselves are blocking the post office funding they want by refusing to negotiate other items in the next COVID relief package.

“And so, listen, we have got a lot of people that are hurting out there,” Meadows said. “And this voting issue is key. If the Democrats feel like this is a big issue -- and I talked to some of the more moderate Democrats and a few progressives as well -- if this is a big deal, let's put it with a stimulus check to go to Americans.

“Let's -- let's put it with enhanced unemployment extension. Let's put it with small business reform in terms of the PPP and extending that. Let's get that. Will the president sign that? Yes, he will sign that. And I'm certain that whether it's $10 billion or $25 billion or something in between (for the Postal Service), we can do that.”

At the end of the interview, Tapper asked Meadows, "Will you guarantee that President Trump will do everything he can to help people vote?"

"But you mentioned the secretaries of state. They're the ones that need to get their act together. We look in New York State. Look at what happened. It's a debacle.

"Can you imagine if we had a presidential election that went on for weeks and weeks and months and months, without -- without a decision, just because we have all this litigation and say, well, we have got to wait another week for ballots?"

The League of Women Voters Education Fund is urging Americans to visit VOTE411.org, which it describes as a non-partisan "one-stop-shop" for election-related information for every state.