CNN's Blitzer Puts Pelosi on the Defensive: 'So Many People Right Now Are Suffering' 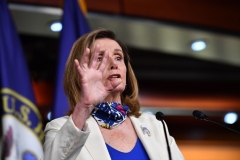 (CNSNews.com) - In an unusual turn of events, House Speaker Nancy Pelosi (D-Calif.) ran into criticism from CNN's Wolf Blitzer on Tuesday over her refusal to reach a compromise COVID relief package with the Trump White House.

Blitzer made the point that even some Democrats want a deal "because so many people right now are suffering."

"I hope you'll ask the same question of the Republicans, about why they don't want to meet the needs of the American people," Pelosi said. "But let me say to those people, because all of my colleagues, we represent these people. I have for over 30 years represented my constituents. I know what their needs are. I listen to them. And their needs are not addressed in the president's proposal."

Blitzer mentioned two Democrats -- Rep. Ro Khanna (D-Calif.) and Andrew Yang, who are pressing Pelosi to make a deal, to which she replied:

"What I say to you is, I don't know why you're always an apologist, and many of your colleagues, apologists for the Republican position. Ro Khanna, that's nice. That isn't what we're going to do. Nobody is waiting until February. I want this very much now. Because people need help now. But it's no use giving them a false thing just because the president wants to put a check with his name on it in the mail..."

Blitzer asked Pelosi what's wrong with a $1.8 trillion deal versus the $2.2 trillion package that Pelosi is clinging to.

Pelosi then accused Blitzer and the two Democrats he named of not knowing what they're talking about:

"You know what? Do you have any idea what the difference is between the spending that they have in their bill and that we have in our bill?" Pelosi asked, explaining some of the details.

Blitzer made the point that the Republicans are not offering everything Democrats want but "there's a lot there."

Blitzer interrupted: I'm asking you serious questions because so many people are in desperate need right now."

"What makes me amused if it weren't so sad is how you all think that you know more about the suffering of the American people than those of us who are elected by them to represent them at that table," Pelosi snapped.

"It is unfortunate that we do not have shared values with this White House and that they have, in their bill, why don't you talk about their bill, a tax break for the wealthiest families in the country while they cut out the earned income tax credit for the poorest families in our country and the poorest children in our country, that we have to fight with them to get them to address the coronavirus crisis..."

Blitzer told Pelosi, "The problem solvers all want a deal right now. And here's what they are complaining about, because you wrote a letter to House Democrats and you said this. Let me read a line from the letter you wrote. 'The president only wants his name on a check to go out before Election Day and for the market to go up.'

"Is that what this is all about, to not allow the president to take credit if there's a deal that would help millions of Americans right now?" Blitzer asked.

“Yes, there's some people who said this or that. Overwhelmingly my caucus wants what is right for the American people. Overwhelmingly, our chairmen, who wrote the bill, read their statements. They all put out their own statements when they saw what the White House was proposing. So do a service to the issue and have some level of respect for the people who have worked on these issues, written the bill to begin with..."

Pelosi accused the bipartisan Problem Solvers Caucus of omitting certain priorities in their bill, "but let's not go into that. You evidently do not respect the chairmen of the committees who wrote these bills, and I wish you would respect the knowledge that goes into getting -- meeting the needs of the American people.

“But, again, you've been on a jag defending the administration all this time with no knowledge of the difference between our two bills, and I thank you for giving me the opportunity to say that to you in person."

"All right, Madam Speaker, these are incredibly difficult times right now, and we'll leave it on that note. Thank you so much for joining us," Blitzer said.

"It's not about me," Blitzer said. "It's about millions of Americans who can't put food on the table, who can't pay the rent and are having trouble getting by these long food lines that we're seeing."

"As we say, don't let the perfect be the enemy of the good, as they say," Blitzer told Pelosi.

"It's nowhere near perfect," Pelosi insisted. "We're not even close to the good."

"All right," Blitzer said. "Let's see what happens because every day is critically, critically important. Thanks so much for joining us," Blitzer said, trying to bring the interview to an end.

"Thanks for your sensitivity to our constituents' needs," Pelosi said.

"I am sensitive to them, because I see them on the street begging for food, begging for money," Blitzer said.

"Have you fed them? Pelosi snapped. "We feed them."

"We'll continue this conversation down the road, for sure," Blitzer said, ending the interview.