Cheney: Insurrection 'An Ongoing Threat'; Schiff: 'Propensity for Violence' Was Known Ahead of Time 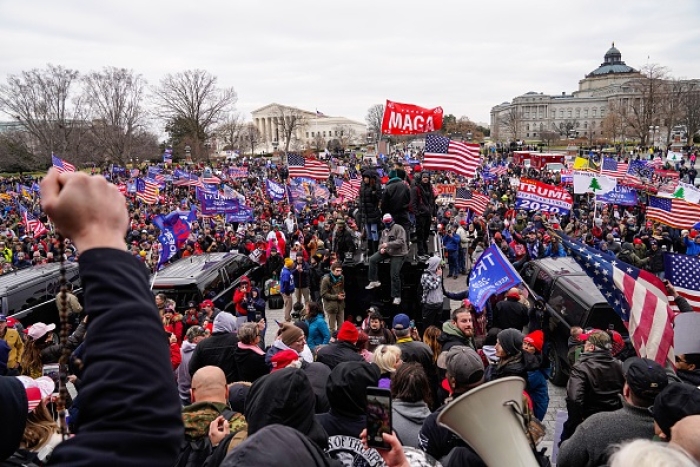 Crowds gather outside the U.S. Capitol for a "Stop the Steal" rally on January 06, 2021 in Washington, D.C. (Photo by Robert Nickelsberg/Getty Images)

(CNSNews.com) - On Thursday night, the Select House committee investigating the January 6 attack on the U.S. Capitol will hold its first prime-time televised hearing so Committee Democrats -- and the committee's two Republican members -- can portray "the extent, the expanse, how broad this multi-pronged effort was" to overturn the 2020 presidential election, as Republican Rep. Liz Cheney put it on Sunday.

According to Cheney, the attack on the Capitol by an unruly mob of Trump supporters was "extremely broad, "well-organized," and "really chilling."

"You know, the threat — and it's an ongoing threat. We're not at a situation where former President Trump has expressed any sense of remorse about what happened. We are, in fact, in a situation where he continues to use even more extreme language, frankly, than the language that caused the attack.

"So, people must pay attention, people must watch, and they must understand how easily our democratic system can unravel if we don't defend it."

(A committee adviser told CNN the hearings will be "exiciting," and he said the American people "need to take notes." More on his comments below.)

Rep. Adam Schiff, a California Democrat who sits on the select committee, told CBS's "Face the Nation," "Our goal is to present the narrative of what happened in this country, how close we came to losing our democracy, what led to that violent attack on the 6th.

"But perhaps most important is the public hasn't seen it woven together. How one thing led to another. How one line of effort to overturn the election led to another, and, ultimately, led to terrible violence. The first non-peaceful transfer of power in our history.

"So, we want to tell that comprehensive narrative. And we're aiming at people, an audience, frankly, that still has an open mind about these facts."

Schiff refused to say what witnesses might appear before the committee on Thursday night. But he did say that the "propensity for violence" will be one of the themes explored -- an interesting angle, given the failure by congressional officials to prepare for the violence they apparently anticipated.

"I can say that certainly one of the themes that we will be fleshing out is the fact that in advance of the 6th, that there was an understanding of the propensity for violence that day, of the participation of white nationalist groups, of the effect that the continued propagation of his big lie to rile up the country and rile up the president's base was likely to lead to violence," Schiff said.

"So, you will see that theme among the narratives that will be exhibited during these hearings. But as to a particular witness, I really can't comment."

Host Margaret Brennan asked Schiff, "But if you don't deliver a bombshell on Thursday, don't you run the risk of losing the public's attention here?"

"We want to counter the continuing propagation of big lies," Schiff responded. "And that's -- that's what our goal is."

Hearings will be 'exciting'

CNN's "State of the Union" interviewed Denver Riggleman, a former Republican congressman who has advised the January 6 committee for the past eight months. Riggleman said the upcoming public hearings, six of them, will be "concise" and "exciting."

"I think people are going to be absolutely surprised how much was known with multiple groups. And I think that's what's going to be exciting to see the committee.

"There's some very talented investigators behind the doors, and even with our teams and things like that, and what they found, but, again, the investigators going through the thousands of interviews that they have and all the data and the videos.

Host Jake Tapper asked Riggleman, "And will there be anything resembling a smoking gun, something that proves that Donald Trump or somebody around him knew that what happened January 6 was not a spontaneous outcry by his supporters, but was a planned attempt to get them to stop counting the electoral votes?"

"When you look at the totality of the evidence, it's pretty apparent that, at some points, President Trump knew what was going on, obviously, right?" Riggleman replied:

"I mean, if you're having meetings within the White House, if you're having individuals that you're paying out there doing lawsuits, the 64, 65 lawsuits, if you're pushing this sort of lie even on Twitter and social media, which is very important, which I think the committee is going to concentrate on, if you look at what's happening and the message that's being pushed by President Trump himself on social media and other individuals, you start to see this pipeline of information that's very damaging and is pushing things like 'Stop the Steal.'

"So, again, I think the committee is going to be able to wrap that up. And what I hope the American people do -- and this is -- listen, I had to give command briefings when I was an intelligence officer, and you're trying to get the generals' attention.

"But, also, the American people have to look at this from the beginning, take their notes, and understand that the committee has to build a case in a very solid, facts-based way. There's not going to be a lot of partisan whining or screaming. The investigators behind the door are nonpartisan individuals.

"They're going to present this case in a very cogent way. But the American people need to -- they need to take notes."

Tapper told Riggleman, "So it doesn't sound like you're saying there's a smoking gun, other than the entire case will be a smoking gun, but no specific, like, we're coming to Washington on this day to overturn the election, Donald Trump signs off, like--"

"Well, that probably is going to be very difficult to even find, based on the limited authorities of Congress, as far as getting data and things like that," Riggleman said.

"However, there's multiple groups involved. And I think that's what's exciting about the hearings, is, they're going to be able to put the multiple groups together. Remember, there's different investigative teams that were looking at different parts of this the whole time."