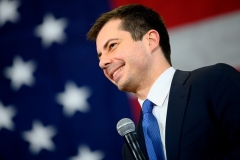 He views his new job -- assuming the Senate confirms him -- as a chance "to actually get something done." Something very big and important:

"A deal is not just possible. It's necessary," Buttigieg said, speaking of the nation's infrastructure:

Again, Americans shouldn't settle for less than our peers around the developed world when it comes to the infrastructure resources that we really count on. And that's part of the mayor's-eye view, I think, too, when you come from that background in a community like mine, where daily life is shaped by transportation, but so is our economy.

And that's true in so many parts of the country. So, when I think about the opportunities ahead, I'm thinking about jobs and economic opportunity. I'm thinking about climate. And there's no way we're going to do what we must do as a country unless we move the transportation sector forward.

And you look at what America is capable of on everything from electric vehicle production to what we could be doing with our power infrastructure. The opportunity is huge. And there's also an opportunity and an imperative when it comes to justice.

It's disproportionately black and brown neighborhoods that were divided by highway projects plowing through them because they didn't have the -- sometimes the political capital to resist, or sometimes nothing at all coming to the most low-income or minoritized neighborhoods.

We have got a chance to get that right. So, enhancing equity, delivering on climate, creating jobs across the department's fundamental mission of, of course, ensuring safety. And there's a lot we have got to look at, not just with traveler safety, but, of course, the safety of the many workers who are working in transportation and that field in general, but especially now.

When we think about front-line workers and workers involved at the tip of the spear of COVID, we think a lot about health care workers, folks in the food industry, and rightly so. But, also, think about how many people are indispensable to the vaccine supply chain and just to America's economy functioning.

We have got to make sure that we're looking after their safety too, especially to get through this first year, which will really be a test of this country in conquering COVID.

President-elect Joe Biden said he nominated Buttigieg to be Transportation Secretary "because he's equipped to take on the challenges at the intersection of jobs, infrastructure, equity, and climate."

However, as a former mayor, Buttigieg has no particular experience in transportation or infrastructure.

Also See:
Biden's Transportation Nominee Buttigieg: 'I Proposed to My Husband Chasten in an Airport Terminal'