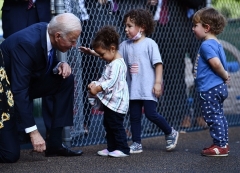 (CNSNews.com) - "We'll have better tools for fighting inflation if we pass this economic package," Transportation Secretary Pete Buttigieg told "Fox News Sunday." He said one of those tools is taxpayer-subsidized child care.

Democrats may (or may not be) close to passing both a bipartisan infrastructure bill and a so-called "human" infrastructure bill, which creates new entitlement programs that put "money directly in the pockets of the Americans who know best how to spend it for their families," Buttigieg said.

The two packages total at least $3 trillion in new government spending at a time when Americans increasingly are concerned about inflation:

"I'm so glad you raised this, Chris," Buttigieg said:

Now, you're going to see some politicians, maybe even on this program, saying that up is down and black is white, and somehow saying the opposite. But let me be clear, this bill will flight inflation.

Wallace told Buttigieg, "A lot of people worry that when you take an inflationary, overheated economy and you add $3 trillion, which is what these two bills would do, $3 trillion in new government spending, you're going to make it even worse. And there are a lot of economic experts who say pass it or not pass it, inflation will continue well into 2022."

"Yeah. So let's break this down, okay?" Buttigieg responded:

There's long-term and short-term. That's definitely true. Now, as I said, 17 Nobel Prize-winning economists are among those who have talked about how doing things to allow Americans to get back to work, putting money in their pockets, but also just making child care more affordable, is going to help with inflation in the long run.

Now, you're right, there's a short-term transitory inflation efforts. The ones that we're already seeing slowing down a little bit, but we're very mindful of, of course, because that's impacting Americans. That, of course, is a consequence of the economic effects of the pandemic.

Look, there are so many things that are still happening in our economy -- distortions, disruptions, things in our supply chain that are affecting prices, that are clearly a direct consequence of the pandemic, which is why the best thing we can do for our economy in the short term and to deal with these transitory issues is to put the pandemic behind us, which is where the president's decisive leadership is so important.

The best thing we can do for the long run, for issues around pricing and supply chain is better infrastructure so that goods can move smoothly in this country and better pro-family policies like child care.

According to the Federal Reserve Bank of St. Louis, "if the money supply (total amount of money in circulation) grows at a faster rate than the economy’s ability to produce goods and services, then inflation will result."

Other causes of inflation include demand outpacing supply and the higher cost of wages and materials raising prices for consumers.