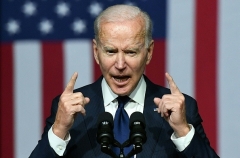 (CNSNews.com) - Secretary of State Antony Blinken was asked on three of the Sunday news shows why President Joe Biden won't hold a joint news conference with Russian President Vladimir Putin after their much-anticipated meeting in Geneva this week:

Blinken gave similar answers, telling Fox News that a solo news conference is "the most effective way for the president to be able to talk with the free press and to share, for as long as he can, what was discussed in the meeting with President Putin, as well as to cover the entire week, to talk about what we've accomplished over the course of the G-7, the NATO meetings, the E.U. meetings."

Blinken noted that Biden gave a solo news conference following the G-7 in England, "So this is not a rare practice."

On ABC's "This Week," Blinken told host Martha Raddatz, "I think the best way for the president to share with the free press and take as many questions as possible about -- about the meeting, about the conversation with President Putin as well as to wrap up an entire week's worth of travel with the G7, with NATO, with the EU, is to be able to talk to that free press and to spend as much time as we can answering their questions."

And Blinken told CNN's "State of the Union," "For the president, the most effective way to be able to share with the free press what he and President Putin talked about is to do it in this way. It is also an opportunity, by the way, to sum up the entire week, the entire trip, the G7, the NATO summit, the E.U. summit. But this is the best opportunity I have to make sure that the free press of the world gets in their questions, and the president can share what was discussed."

Host Dana Bash followed up, asking Blinken, "So, are you saying that you're not having a joint press conference because you're worried about the Russian press being there?"

"We think that having the press conference -- by the way, the president, maybe even as we speak, is doing a solo press conference after the G7. This is not exactly a rare occurrence. But we think it's the most effective way to be able to share with the free press what they talked about and what we're focused on, and to make sure that you all get a chance to ask as many questions as possible," Blinken said.

This is not a contest about who can do better in front of a press conference to try to embarrass each other. It’s about making myself very clear what the conditions are to get a better relationship are — with Russia.

We’re not looking for conflict. We are looking to resolve those actions which we think are inconsistent with international norms, number one. Number two, where we can work together, we may be able to do that in terms of some strategic doctrine that — that may be able to be worked together. We’re ready to do it. And there may be other areas. There’s even talk there may be the ability to work together on climate.

So the bottom line is that I think the best way to deal with this is for he and I to meet, he and I to have our discussion. I know you don’t doubt that I’ll be very straightforward — (laughs) — with him about our concerns. And I will make clear my view of how that meeting turned out, and he’ll make clear how — from his perspective, how it turned out.

As for his message to Putin, Biden last week told reporters that "I'll tell you after I deliver it."

This is not a light switch moment. This is about the president wanting to do two things. And he's been very clear about it, to tell President Putin directly that we seek a more predictable, stable relationship. And if we're able to do that, there are areas where it's in our mutual interest to cooperate.

And this is the beginning of testing that proposition. And Russia will have to decide by its actions which direction it wants to go in. And I think Secretary Rice is exactly right that we'll see that play out in the months ahead.