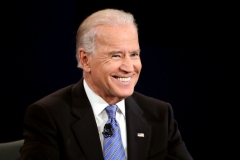 Former Vice President Joe Biden says he would tax investors by raising the capital gains tax, now 15 percent or 20 percent on the sale of most assets, to 40 percent. The money raised would go to programs for the middle class.

"I don't oppose a wealth tax," Biden told CBS's "60 Minutes" in an interview that aired Sunday night. (Democrat Sen. Elizabeth Warren has proposed a 2 percent tax on people with a net worth of $50 million to $1 billion and a 3 percent annual tax on households with a net worth over $1 billion.)

Bien told CBS's "60 Minutes," "I propose changing the whole tax system. The tax I would put on the wealthy will, in fact, cost more than 2 percent because they're not gonna be able to take a capital gain. They're gonna pay at 40 percent, like everybody else -- 39.8 percent."

Biden said President Trump gave the middle class a "negligible" tax cut. "That fact is that what we should be doing is making sure that the wealthy pay their fair share," he said.