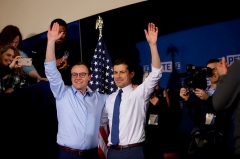 Buttigieg, with no particular credentials in the transportation industry, touted his "personal love of transportation," injecting a very personal anecdote into the mix:

I also had a personal love of transportation ever since childhood. More than once, as a college student, I would convince a friend to travel nearly 1,000 miles back to Indiana with me on Amtrak. Though I know that in this administration I will, at best, aspire to be the second biggest train enthusiast around.

I spent a spring break in graduate school aboard a cargo ship studying there. Travel in my mind is synonymous with growth, with adventure. Even love, so much so that I proposed to my husband Chasten in an airport terminal. Don't let anybody tell you that O'Hare isn't romantic.

Buttigieg hailed the incoming Biden administration's "historic opportunity" to "deliver policies and resources that will create jobs, rise to the climate challenge and equitably serve all Americans all while continuing to ensure the safety of travelers and workers alike."

He said the slogan "build back better" begins with building:

"Americans shouldn't settle for less than our peers in the developed world when it comes to our roads and bridges, our railways and transit systems. U.S. should lead the way and I know that in this administration we will. We'll bring together leaders and communities from every corner, labor and business, left, right and center, urban and rural communities of color, tribal nations--mayors, counties, states--everyone who has a stake in American infrastructure to design a better future."

Buttigieg noted that he is the youngest member named to the Biden Cabinet so far. And that's not the only historic aspect, he said:

I'm also mindful that the eyes of history are on this appointment, knowing that this is the first time an American president has ever sent an openly LGBTQ cabinet member to the Senate for confirmation.

I can remember watching the news, 17 years old in Indiana seeing a story about an appointee of President Clinton named to be an Ambassador attacked and denied a vote in the Senate because he was gay. Ultimately, able to serve only by a recess appointment.

At the time, I had no aspirations of being appointed by a president to anything. At that age, I was hoping to be an airline pilot. And I was a long way from coming out even to myself but still I watched that story and I learned something about some of the limits that exist in this country when it comes to who is allowed to belong. But just as important, I saw how those limits could be challenged.

So two decades later, I can't help but think of a 17 year old somewhere who might be watching us right now. Somebody who wonders whether and where they belong in the world or even in their own family and I'm thinking about the message that today's announcement is sending to them. So, thank you, Mr. President-elect. Thank you for honoring your commitment to diversity with this administration that you are assembling..."