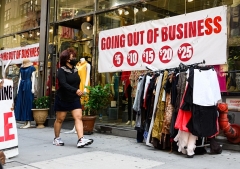 A pandemic-induced business closure, one of many, in New York City on Sept. 8, 2020. (Photo by Noam Galai/Getty Images)

(CNSNews.com) - "Look, the way to open businesses is give them the wherewithal to be able open," Democrat Joe Biden said at Tuesday's debate.

Biden endorsed the Democrats' HEROES Act, which Republicans have dismissed as a $3 trillion liberal wish list that include items unrelated to the coronavirus pandemic.

"Nancy Pelosi and Schumer, they have a plan. He won’t even meet with them," Biden said. "The Republicans won’t meet in the Senate. He sits in his golf course. Well, I mean, literally, think about it. Think about it."

As the bickering between the two candidates resumed, Wallace once again tried to move on to another topic instead of pressing Biden to answer the question.

Here's how that exchange went:

Wallace: "When it comes to how the virus has been handled so far, the two of you have taken very different approaches, and this is going to affect how the virus is handled going forward by whichever of you ends up becoming the next president. I want to quickly go through several of those. Reopenings. Vice President Biden, you have been much more reluctant than President Trump about reopening the economy and schools. Why, Sir?"

Biden: "Because he doesn’t have a plan. If I were running it, I’d know what the plan is. You’ve got to provide these businesses the ability to have the money to be able to reopen with the PPE, as well as with the sanitation they need. You have to provide them classic--"

Biden: "Will he just shush for a minute?"

Trump: "Tell that to Nancy Pelosi and cryin' Chuck Schumer."

Biden: "Nancy Pelosi and Schumer, they have a plan. He won’t even meet with them. The Republicans won’t meet in the Senate. He sits in his golf course. Well, I mean, literally, think about it. Think about it."

Trump: "You probably play more than I do, Joe."

Wallace intercedes: "What about this question of re­-openings and the fact--"

Trump interrupts: "Well, he wants to shut down this country, and I want to keep it open, and we did a great thing by shutting it down--"

Biden: "You just admitted you shut it down."

Trump: "Wait a minute, Joe. Let me shut you down for a second, Joe, just for one second. He wants to shut down the country. We just went through it. We had to, because we didn’t know anything about the disease.

“Now we’ve found that elderly people with heart problems and diabetes and different problems are very, very vulnerable. We learned a lot. Young children aren’t, even younger people aren’t. We’ve learned a lot, but he wants to shut it down. More people will be hurt by continuing.

“If you look at Pennsylvania, if you look at certain states that have been shut down, they have Democrat governors, all, one of the reasons they shut down is because they want to keep it shut down until after the election on November 3rd...because it's a political thing."

Wallace steers in another direction: "All right. I want to move onto another…"

Trump, speaking over Wallace: "But those states -- those states are not doing well that are shut down right now."

Biden again: "I got to respond to that."

Trump: "He wants to shut down the whole country."

Wallace then turned to the subject of masks, and when the mask question finally went to Biden, Biden tried to make his point about shutting down the country: "Look, the way to open businesses is give them the wherewithal to be able open. We provided money, the--"

Later, the candidates returned to the topic of reopening the economy.

Trump said he "built the greatest economy in history," and he said Biden "will shut it down again. He will destroy this country...This guy will close down the whole country and destroy our country. Our country is coming back incredibly well, setting records as it does it. We don’t need somebody to come in and say, 'Let’s shut it down.'”

Biden, when he finally addressed the topic, said:

And the idea that he (Trump) is insisting that we go forward and open when you have almost half the states in America with a significant increase in COVID deaths and COVID cases in the United States of America, and he wants to open it up more. Why does he want to open it up? Why doesn't he take care of the… You can’t fix the economy until you fix the COVID crisis. And he has no intention of doing anything about making it better for you all at home in terms of your health and your safety.

Schools. Why aren’t schools open? Because it costs a lot of money to open them safely. They were going to give, his administration, going to give the teachers and school students masks, and then they decided no, couldn’t do that because it’s not a national emergency. Not a national emergency. They’ve done nothing to help small businesses. Nothing. They’re closing. One in six is now gone. He ought to get on the job and take care of the needs of the American people so we can open safely.

"They’ll be careful, but they want their schools open," Trump said.

"I’m the one that brought back football," Trump said. "By the way, I brought back Big Ten football. It was me and I’m very happy to do it--"

Wallace then moved on to Trump's taxes.