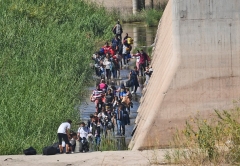 Migrants attempt to cross in to the U.S. from Mexico at the border October 10, 2021 in San Luis, Arizona. (Photo by Nick Ut/Getty Images)

(CNSNews.com) - Tucson, Arizona Police Chief Chris Magnus, tapped to be President Biden's Customs and Border Protection Commissioner, is the latest Biden appointee to dance around the word "crisis" as it applies to the wide-open southern border, where drugs and foreigners continue surging into the United States.

At his confirmation hearing on Tuesday, Magnus was asked a simple question that he did not answer to the satisfaction of Sen. Todd Young (R-Ind.).

"Mr. Magnus, I would like to start off with a yes or no question," Young said. "Do you believe we have a crisis on the southern border, yes or no?”

"Senator, I'm not sure -- does it really matter whether we call it a major challenge, a crisis, a big problem?" Magnus answered.

Young told him, "I think it speaks to a level of urgency and seriousness of purpose and understanding of the gravity of the situation. I mean, presumably, one would answer a call to service in this position because you understand the importance of this moment in history to be commissioner of CBP. So, do we have a crisis on the border? Yes or no?"

"Senator, let me assure you that no one believes there is greater urgency to this matter than I do. I have been at the southern border--"

"So it's urgent," Young interrupted. "The characterization of 'urgent' strikes the common ear as less than a crisis. Are you saying there is not a crisis at the border?"

"Is there a crisis or is there not a crisis at the border?" Young asked again:

"Senator, I would say that my highest priority at this point--"

"I didn't ask your priority," Young interrupted again. "I asked you to characterize the situation at the border. Is there a crisis at the border? You have been nominated to serve as commissioner to the Customs and Border Patrol (Protection) agency at a time that I regard as a crisis. Are you saying there's not a crisis?"

"Senator, what I'm certainly trying to convey is how serious I take what's happening at the border and the amount of work that I want to put in to addressing it."

"Noted," Young said. "Noted. DHS tells us that we've already seen 1.3 million illegal border crossings so far this year. That's about 1.5 times the population of Indianapolis, Indiana. I would say that's a crisis. What number of illegal crossings would you consider to be a crisis? What if we were to quintuple that number? Would you then call it a crisis?" Young asked.

"Senator, I appreciate your question, and I'm already doing my best to acknowledge that the situation is very serious. It would be regardless of what we call it -- it is something important to me."

Also See:
DHS Secretary Mayorkas Says There is No Crisis at U.S.-Mexico Border