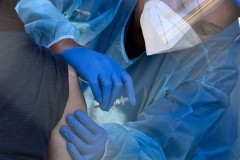 Biden told CNN's Jake Tapper on Thursday, "the vaccine is a good idea," but "it's an incredibly expensive proposition" that's "going to cost literally billions of dollars" to distribute.

The Trump administration has made first responders and the elderly in nursing homes a priority for getting the first available shots, but Biden added another category based on race:

But we also have to make sure that when the vaccine is distributed, it's accessible to people who have been hurt the most -- the brown and black communities, which are not likely to be able to access, for example, Walmarts or access -- I mean, we have to get to their neighborhoods.

So it's a really difficult but doable project. But it has to be well planned. And that's what we're in the process of beginning to do now.

Tapper asked Biden about his plan to appoint "somebody in the White House to be in charge of inequities in the health care system."

Biden indicated that COVID vaccine distribution to minorities will be among that person’s “primary responsibilities.”

"Look, folks who are African-Americans and Latinos are the first ones hurt when something happens, the last one to recover. And you saw the statistics.