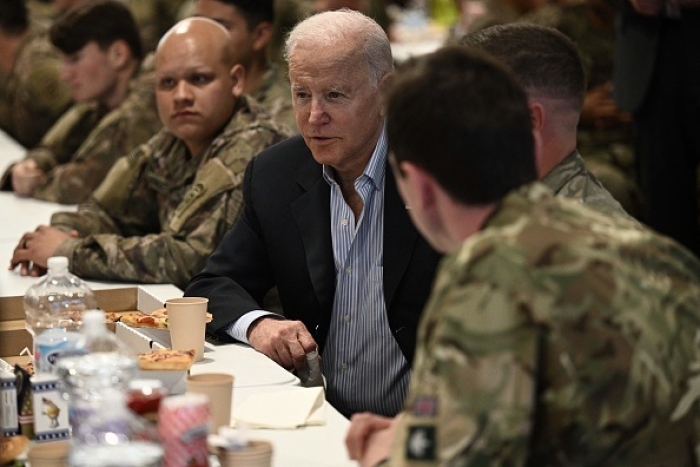 President Joe Biden talks to service members from the 82nd Airborne Division in Poland on March 25, 2022. (Photo by BRENDAN SMIALOWSKI/AFP via Getty Images)

(CNSNews.com) - President Biden on Monday was asked to clarify the puzzling comment he made last Friday to members of the 82nd Airborne Divison who are now stationed in Poland.

In his remarks to the American troops, Biden talked about the "backbone" of the Ukraine people: "Look at how they're stepping up. And you're going to see when you're there. And you — some — some of you have been there. You’re going to see — you’re going to see women, young people standing -- standing the middle of -- in front of a damn tank, just saying, 'I'm not leaving. I’m holding my ground.'"

On Monday, a reporter asked Biden what he meant, since he and his administration have insisted all along that no American troops will go into Ukraine, period.

Biden interrupted, "None of the three occurred."

"None of the three occurred?" the reporter repeated.

"You interpret the language that way," Biden said. "I was talking to the troops. We were talking about helping train the troops in — that are — the Ukrainian troops that are in Poland.  That’s what the context. I sat there with those guys for a couple hours. That’s what we talked about."

The reporter followed up: "So when you said, 'You’re going to see when you’re there,' you were not intending to send U.S. (troops to Ukraine)?"

Biden responded, "I was referring to -- with -- being with and talking with the Ukrainian troops who are in Poland."

Later on Monday, a White House official was quoted as saying, "There are Ukrainian soldiers in Poland interacting on a regular basis with U.S. troops, and that’s what the President was referring to."

"I think this probably refers to the manner in which we are helping provide material and assistance and getting that into Ukraine," Kirby said. "As you know, we had trainers on the ground and we had to move them outside of Ukraine as the invasion looked like it was going to be imminent.

"We had some Florida National Guard...and we had to move them outside the county. So there's no active training right now, but there's probably some interactions just in terms of the transshipments of materiel and assistance."

CNN's John Berman followed up: "So no active training in Poland?" he asked.

"Well, we are, actually, our troops are training in Poland, absolutely, we're training with Polish allies," Kirby said. But as far as training the Ukrainians, Kirby repeated that the "interactions are really more around the transshipment of materiel, but there's interactions."

"But If that's the case, that is surely classified, and it may be that he's explaining classified secrets on national television.

“Sean, this is like Mr. Magoo as president, where every time he explains one thing, it gets worse and worse and worse, and we've got nuclear weapons pointed at each other. It is incredibly dangerous, this kind of presidential weakness."