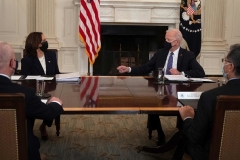 (CNSNews.com) - On the eve of his long-awaited first news conference as president, Joe Biden put Vice President Kamala Harris in charge of border security, adding to the "multiple other things I have her leading."

He also said Harris speaks for him and “doesn’t have to check with me. She knows what she's doing…”

In remarks before a Cabinet meeting on Wednesday, Biden blamed the surge of illegal immigration on the Trump administration -- "but it's our responsibility to deal with it humanely and to -- and to stop what's happening.

"And so, this increase has been consequential, but the Vice President has agreed -- among the multiple other things that I have her leading -- and I appreciate it -- agreed to lead our diplomatic effort and work with those nations to accept re-, the returnees, and enhance migration enforcement at their borders -- at their borders."

And I can think of nobody who -- who is better qualified to do this than a former -- this is a woman who ran the second-largest attorney general's office in America -- after the U.S. -- after the United States Attorney General -- in the state of California, and has done a great deal upholding human rights, but also fighting organized crime in the process.

So it's not her full responsibility and job, but she's leading the effort because I think the best thing to do is to put someone who, when he or she speaks, they don't have to wonder about is that where the president is. When she speaks, she speaks for me. Doesn't have to check with me. She knows what she's doing, and I hope we can move this along.

But -- so, Madam Vice President, thank you. I gave you a tough job, and you're smiling, but there's no one better capable of trying to organize this for us.

Biden several times mentioned the workload that he's placing on his vice president.

-- "I said when we became a team and got elected, that the vice president was going to be the last person in the room. She didn't realize that means she gets every assignment."

-- "But the Vice President and I, and all of us here, have been working very hard to -- to pass the legislation that -- that is going to beat this virus, as well as get people back to work and change their prospects. And so, she's traveling all over the country working that. In addition to that, there's about five other major things she's handling, but I've asked her, the VP, today -- because she's the most qualified person to do it -- to lead our efforts with Mexico and the Northern Triangle..."

Harris, in turn, thanked the president "for having confidence in me."

She called the overrun border a "challenging" situation:

And while we are clear that people should not come to the border now, we also understand that we will enforce the law and that we also -- because we can chew gum and walk at the same time -- must address the root causes that cause people to make the trek, as the president has described, to come here.

And I look forward to engaging in diplomacy with government, with private sector, with civil society, and -- and the leaders of each in El Salvador, Guatemala, and Honduras to strengthen democracy and the rule of law, and ensure shared prosperity in the region.

We will collaborate with Mexico and other countries throughout the Western hemisphere. And as part of this effort, we expect that we will have collaborative relationships to accomplish the goals the President has and that we share.

I also look forward to working with members of the Congress who, I think, share our perspective on the need to address root causes for the migration that we've been seeing. And needless to say, the work will not be easy, but it is important work. It is work that we demand -- and the people of our countries, I believe, need -- to help stem the tide that we have seen.

Also See:
VP Harris on the Overrun Border: 'It's a Huge Problem'; Sen. Graham: 'Tell Everybody to Go Home'