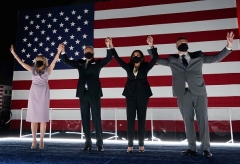 All wearing big, black masks, the Bidens join Kamala Harris and her husband Douglas Emhoff on stage at the Chase Center in Wilmington, Delaware, at the conclusion of the Democratic National Convention on August 20, 2020. (Photo by OLIVIER DOULIERY/AFP via Getty Images)

(CNSNews.com) - Touting a one-size-fits-all approach to the coronavirus pandemic, Democrat presidential nominee Joe Biden told Americans Thursday night he will require all Americans to wear a face mask, as "a patriotic duty to protect each other," he said.

President Donald Trump, at an August 13 news conference, said his administration has a different approach: "If the president has the unilateral power to order every single citizen to cover their face in nearly all instances, what other powers does he have?" Trump asked.

"As president, the first step I will take will be to get control of the virus that's ruined so many lives," Biden told the Democrat National Convention:

The President keeps telling us the virus is going to disappear. He keeps waiting for a miracle. Well, I have news for him, no miracle is coming.

We lead the world in confirmed cases. We lead the world in deaths. Our economy is in tatters, with Black, Latino, Asian American, Native American communities bearing the brunt of it. And after all this time, the president still does not have a plan.

Well, I do. If I'm your president, on day one we'll implement the national strategy I've been laying out since March. We'll develop and deploy rapid tests with results available immediately.

We'll make the medical supplies and protective equipment that our country needs. And we'll make them here in America, so we will never again be at the mercy of China or other foreign countries in order to protect our own people.

We'll make sure our schools have the resources they need to be open, safe, and effective. We'll put politics aside; we'll take the muzzle off our experts so the public gets the information they need and deserve -- honest, unvarnished truth. They can handle it.

We'll have a national mandate to wear a mask -- not as a burden, but as a patriotic duty to protect one another. In short, we'll do what we should have done from the very beginning.

At the end of his speech, Biden and his wife Jill and his running mate Kamala Harris and her husband Doug Emhoff -- all wearing black masks -- stepped outside to watch fireworks celebrating Biden's nomination.

"He wants the president of the United States with the mere stroke of a pen to order over 300 million American citizens to wear a mask for a minimum of three straight months," Trump said.

At the same time we also understand that each state is different and is facing unique circumstances. You have very, very different states facing very unique differences and circumstances. We have entrusted the governors of each state elected by the people to develop and enforce their own mass policies and other policies following guidance from the federal government and CDC.

We are working with each state to implement a plan based on the facts and science. We will continue to urge Americans to wear a mask when they cannot socially distance, but we do not need to bring the full weight of the federal government down on law-abiding Americans to accomplish this goal. Americans must have their freedoms, and I trust the American people and their governors very much...Joe doesn't.