Biden: 'This Was Not a Choice of Which American to Bring Home' 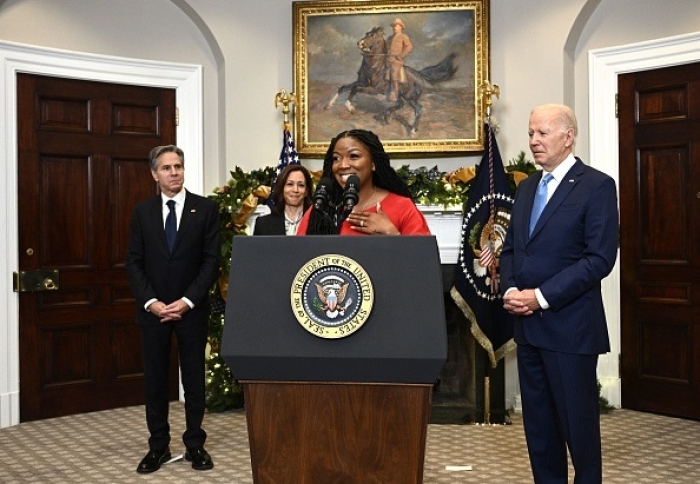 (CNSNews.com) - We'll keep negotiating in good faith for Paul's release," President Joe Biden said today, as he announced a prisoner swap -- a Russian arms dealer for a WNBA star -- that will bring Brittney Griner home to her wife, but leave American Paul Whelan in a Russian prison.

"This is a day we've worked toward for a long time," Biden said Thursday morning, announcing that with the help of the United Arab Emirates, Brittney is now on a flight to the United States.

"We never forgot about Britney, we've never forgotten about Paul Whelan, who's been unjustly detained in Russia for years," Biden said.

"This was not a choice of which American to bring home. We brought home Trevor Reed when we had a chance, earlier this year. Sadly, for totally illegitimate reasons, Russia is treating Paul's case differently than Brittney's, and even though we have not yet succeeded in securing Paul's release, we're not giving up. We will never give up.

"We remain in close touch with Paul's family, the Whelan family," Biden continued:

"And my thoughts and prayers are with them today. They have to have such mixed emotions today. And we'll keep negotiating in good faith for Paul's release, I guarantee that. I say that to the family, I guarantee you.

"I urge Russia to do the same to ensure that Paul's health and humane treatment are maintained until we are able to bring him home. I don't want any American to sit wrongfully detained one extra day if we can bring that person home.

We also want to prevent any more American families from suffering this pain of separation, and I strongly urge -- I strongly urge all Americans to take precautions, including reviewing the State Department's travel advisories before they travel overseas, which now includes warnings about the risk of being wrongfully detained by a foreign government.

"Make no mistake about it. This work is not easy. Negotiations are always difficult. There are never any guarantees. But it's my job as president of the United States to make the hard calls and protect American citizens everywhere in the world, anywhere in the world. And I'm proud that today we have made one more family whole again."

Press reports say he was serving a 25-year prison sentence in the United States "on charges of conspiring to kill Americans, acquire and export anti-aircraft missiles, and provide material support to a terrorist organization."

Viktor Bout, an infamous Russian arms dealer linked to bloody conflicts on several continents, was arrested in Thailand in 2008 as a result of what then-INTERPOL head Ronald Noble described as a “multi-country” law enforcement operation serving as “a model for how suspected dangerous international criminals need to be investigated, charged and brought to justice in the 21st century.”

In a sting operation set up by U.S. Drug Enforcement Administration agents, Bout had conspired to sell millions of dollars of weapons to the Revolutionary Armed Forces of Colombia (FARC). These included surface-to-air missile systems and armor piercing rocket launchers, which Bout allegedly said he could arrange to airdrop into Colombian territory with the use of combat parachutes.

At the time FARC was a U.S.-designated foreign terrorist organization. The Marxist narco-terrorists waged a half-century-long insurgency before striking a peace deal with the country’s government in 2017.

Bout was later extradited to the U.S., convicted and jailed.

According to the U.S. Treasury Department, the career of a man who Noble said was “believed to be the world’s largest arms dealer” included supplying military equipment to the Taliban during its previous rule in Afghanistan, for which Bout allegedly made $50 million in profit.

The department said Bout had also been involved in providing weapons that had “helped fuel conflicts and support U.N. sanctioned regimes in Afghanistan, Angola, the Democratic Republic of Congo, Liberia, Rwanda, Sierra Leone and Sudan.”

As reported when he was arrested in Bangkok, “Published reports over the years have also linked Bout, who owns dozens of transport aircraft, to conflicts in the Balkans, where he is suspected of providing weapons to Bosnian Muslims in 1992, as well as the southern Philippines and Chechnya. In a radio interview in Moscow in 2002, he denied reports of links with al-Qaeda and the Taliban in Afghanistan.”