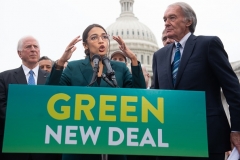 He included climate change in those four crises:

No generation ever knows what history will ask of it. All we can ever know is whether we're ready when that moment arrives. And now history has delivered us to one of the most difficult moments America has ever faced.

Four -- four historic crises. All at the same time. A perfect storm.

The worst pandemic in over 100 years. The worst economic crisis since the Great Depression. The most compelling call for racial justice since the 60's. And the undeniable realities and just the accelerating threats of climate change.

So, the question for us is simple: Are we ready? I believe we are. We must be.

Later in his speech, Biden talked about his plan to "rebuild our economy."

"We can, and we will, deal with climate change," he said. "It's not only a crisis, it's an enormous opportunity. An opportunity for America to lead the world in clean energy and create millions of new good-paying jobs in the process."

President Trump told Fox News's Sean Hannity Thursday night that Biden is being pushed to the left by Sen. Bernie Sanders and his supporters, who are "anti-fracking and anti-fossil fuel."

At a time when the United States is energy independent, a Biden administration would push the country into a "massive depression" by decimating the energy industry, Trump said. "And when you talk about Pennsylvania and Ohio and Texas and Oklahoma, they're anti-fracking. They (Democrats) could end it quickly, and they will."

"Combating the climate crisis" is the first issue addressed by the Biden-Sanders Unity Task Force, which has issued recommendations in six policy areas.

The proposal, written with input from former Secretary of State John Kerry and Rep. Alexandria Ocasio-Cortez, says, "We can and must build a thriving, equitable, and globally competitive clean energy economy that puts workers and communities first and leaves no one behind."

They promise the "clean energy revolution," or the Green New Deal, will create "millions" of union jobs.

At a rally in Pennsylvania on Thursday, President Donald Trump warned:

"Joe Biden is a puppet of the radical-left movement that seeks to destroy the American way of life...Joe Biden has pledged to hike your taxes by $4 trillion in the largest tax hike in history, and they are going to waste the money on the Green New Deal, Green New Deal. You know what you get out of that? Nothing -- nothing except debt and death."

Here are some snippets from the Biden-Sanders climate crisis policy paper:

-- We agree with scientists and public health experts that the United States -- and the world -- must achieve net-zero greenhouse gas emissions as soon as possible, and no later than 2050. To reach net-zero emissions as rapidly as possible, Democrats commit to eliminating carbon pollution from power plants by 2035 through technology-neutral standards for clean energy and energy efficiency.

-- Democrats will lower families’ energy bills by making energy-saving upgrades to up to two million low-income households and affordable and public housing units within five years, creating hundreds of thousands of jobs and promoting safe, healthy and efficient homes.

--We will set a bold, national goal of achieving net-zero greenhouse gas emissions for all new buildings by 2030, on the pathway to creating a 100 percent clean building sector. Within five years, we will incentivize tens of billions of dollars in private-sector investment to retrofit four million buildings, including helping local governments save money and cut pollution by weatherizing and upgrading energy systems in hospitals, schools, public housing, and municipal buildings.

-- We will reduce harmful air pollution and protect our children’s health by transitioning the entire fleet of 500,000 school buses to American-made, zero-emission alternatives within five years.

-- Democrats will protect wildlife habitats and biodiversity, slow extinction rates, and grow America’s natural carbon sinks by ensuring 30 percent of our lands and waters are conserved by 2030.

-- Beyond immediately rejoining the Paris 6Climate Agreement, including the Green Climate Fund, and encouraging our partners and allies to increase their ambition to reduce their own carbon pollution, Democrats will work to ratify the Kigali Amendment to the Montreal Protocol and move expeditiously to phase out super-polluting hydrofluorocarbons in the United States.