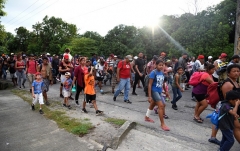 An unending flow of humanity heads toward the United States, as the Biden administration does nothing to discourage illegal immigration. (Photo by ISAAC GUZMAN/AFP via Getty Images)

(CNSNews.com) - At a Monday meeting with the nation's governors, President Biden mentioned "border security," a topic he rarely addresses, despite record flows of illegal immigrants into this country, a situation that stems from his administration's lax policies.

Biden today said it's a question of figuring out "why they're leaving in the first place."

"Border security. We're working a lot with neighboring countries," Biden said at the conclusion of his opening remarks to the governors.

A lot to do, there's a lot, I think -- I think one of the fundamental things we gotta do, in addition to some of the changes we'll make, I won't get into today, but -- is that if we figure out why they're leaving in the first place.

It's not like people sit around and say, in Guadalajara -- 'I've got a great idea, let's sell everything we have, give it to a coyote, takes us across the border, leave us in the desert, in a country that doesn't want us, we don't speak the language. Won't that be fun.'

You know, there are gangs we're working on. There's a whole lot of illegal -- um, um, movement, but ah, there's also a way to begin to deal with the reason they're leaving in the first place. And I’d love to talk with you personally about that, in a little bit, if I may.

Here Biden said he'd stop speaking and take questions from the governors. His handlers ushered the press out of the room first.

Recently revealed videotape, played on cable channels, shows planeloads of illegal immigrants, many of them adult men, being flown to destinations around the country.

Biden and his fellow Democrats have refused to address border security -- or even visit the border, in Biden's case -- and a recent poll shows ‘security issues,’ including the open border, are a major concern of voters.