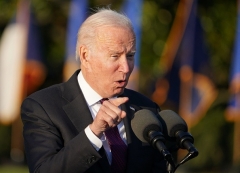 (CNSNews.com) - President Biden on Tuesday took credit for the supposed strength of the U.S. economy -- "the strongest economic recovery in the world," he called it. But he also said don't blame him for the "painful" spike in gasoline prices.

It — what it is doing: It’s increasing the availability of jobs -- jobs building electric cars, like the one I drove at the GM Detroit — at the GM factory in Detroit last week.

For the hundreds of thousands of folks who bought one of those electric cars, they’re going to save $800 to $1,000 in fuel costs this year.

And we’re going to put those savings within reach of more Americans and create jobs installing solar panels, batteries, electric heat pumps — jobs making those clean power-generating devices. And by the way, deploying these technologies for each home where they’re installed is going to save folks an additional hundreds of dollars in energy costs every year.

Let’s do that. Let’s beat climate change with more extensive innovation and opportunities. We can make our economy and consumers less vulnerable to these sorts of price spikes when we do that.

And so nobody should be surprised. And I don't think most Pennsylvanians are surprised that prices are going through the roof, supplies are shrinking. And now, the president goes around pleading with OPEC countries to increase their production. How ridiculous.

And this isn't going to work. This -- the Strategic Petroleum Reserve, he releases some oil from that. The swing producers and OPEC can decide to just scale back what they produce to make sure that the prices stay high.

You know, you've fundamentally -- you can't begin the process of crushing supply and not expect to see a price spike.

President Biden on Tuesday announced the release of 50 million barrels of oil from the Strategic Petroleum Reserve, which President Trump had filled to its 714-million-barrel capacity.

Obviously, the president does not control the price of gasoline — no president does. But what we’re seeing right now is this global mismatch between supply and demand. Oil production is lagging behind as the rest of the economy roars back to life after the shutdown.

So, we, in this administration, are leaving no stone unturned as we examine the market to figure out what’s behind the high prices.

(Both Biden and Granholm suggested on Wednesday that oil companies are gouging consumers.)

In reaction, Sen. Toomey said, "you can't suspend the laws of supply and demand, however much you might like to. Nobody can. And so, when the president takes measures to curb supply, it's going to catch up, and it's going to result in higher prices when demand continues.

"In fact, the president has made the demand problem worse with all the massive amount of money that they're spending. So, it -- the misguided policies of this administration are certainly contributing to the price spikes that we're seeing."

Toomey said no one believes the Democrat spin that their latest multi-trillion-dollar Build Back Better Act will make inflation go down. That's trillions on top of trillions Congress that wants to spend:

Now, I understand why during the peak of the pandemic, and the economic collapse that was caused by government shutting down our economy, you know, we had to take dramatic steps, that ended up being $3 trillion of spending above and beyond the usual spending.

And then, President Biden comes in with the economy already recovering, spends another two trillion, then there's the $1-trillion-plus for the infrastructure bill.

Now they want, who knows how many trillions? Bret, this all adds up to maybe $10 trillion over 10 years. And we wonder why we're seeing record inflation? I mean, the inflation in October was the worst we've had in 30 years. That's a huge problem.

You think about the actual -- individual items in this bill. There's all kinds of programs that will really to seem designed to make the middle-class dependent on government, new welfare programs.

In addition to the "staggering" spending, "all the tax increases are going to make us less competitive as a nation against other countries around the world," Toomey added.