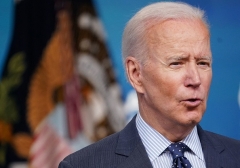 (CNSNews.com) - President Joe Biden took credit for the the May jobs report that was released on Friday, saying it shows his "bold action" American Rescue Plan is working -- and noting that vaccinations have risen since the most recent employment data was collected.

After running through the generally positive numbers released a few hours earlier by the Labor Department's Bureau of Labor Statistics, Biden gave the report a final promising spin, but he misspoke, saying the COVID deaths are up.

To sum it up, look, COVID cases are down. COVID deaths are up. [He meant down.] Unemployment filings are down. Hunger is down. Vaccinations are up. Jobs are up. Wages are up. Manufacturing is up. Growth is up. People gaining health care coverage is up. And small business confidence is up.

America is finally on the move again. As we continue this recovery, we're going to hit some bumps along the way. Of course, that will happen. We can't reboot the world's largest economy like flipping on a light switch. There's going to be ups and downs in jobs and economic reports.

But there are going to be supply chains issues and price pressures on the way back to stability and steady growth. In the coming weeks, my admin's going to take steps to combat these supply constraints, building on the work we're doing on the computer chips -- that is, we're providing more computer chips to be manufactured here in the United States so it doesn't slow up the manufacturing of automobiles, for example.

Everyone needs to get their shots, though. Now's the time to accelerate the process we've been making. Now's the time to build on the foundation we laid. Because while our progress is undeniable, it is not assured. That's why I proposed the American jobs plan and the American Family Plan for generational investments we need today -- we need to make those investments today to continue to succeed tomorrow.

We have a chance to seize on the economic momentum of the first months of my admin. Not just to build back but to build back better. This much is already clear. We're on the right track. Our plan is working. And we're not going to let up now. We're going to continue to move on. I'm extremely optimistic. I hope you are as well.