Biden: 'Federal Gov't Designed...To Be a Ballast' for Cash-Strapped States 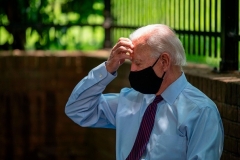 (CNSNews.com) - Plugging the Democrats' $3-trillion HEROES Act on Monday, Democrat presidential candidate Joe Biden indicated that the federal government was intended to be a backstop for cash-strapped states.

Biden was speaking to union members in Lancaster, Pennsylvania:

And the House has passed legislation -- the so-called HEROES Act provides for significant help to allow people, first responders, whether they are docs or whether they're firefighters, police officers, whether they're -- whoever they are, the folks who are keeping the sewers functioning, the people who make the system work -- and provided the money for states to be able to pay them.

You all know that states have to have a balanced budget. There is a reason why the federal government was designed not to have to have one -- to be able to be a ballast for when things got really bad.

Biden said he and Barack Obama "inherited one of the worst economies that existed" following the financial collapse that began in 2007.

President Donald Trump last month expressed support for parts of the HEROES Act, but not for state "bailouts."

In the current negotiations, we have repeatedly stated our willingness to immediately sign legislation providing expanded unemployment benefits, protecting Americans from eviction, and providing additional relief payments to families.

Democrats have refused these offers; they want to negotiate. What they really want is bailout money for states that are run by Democrat governors and mayors, and that have been run very badly for many, many years — and many decades, in fact.  You know the states; everybody knows who we’re talking about and what we’re talking about.  I don’t think we have to go over it.

Nancy Pelosi and Chuck Schumer have chosen to hold this vital assistance hostage on behalf of very extreme partisan demands and the radical-left Democrats, and we just can’t do that.

Trump said one third of the $3 trillion bill is "completely unrelated" to the virus.

Biden on Monday said President Trump has been spending "too much time on his golf courses and in his sand traps," instead of calling Democrat and Republican leaders to the White House and forcing them to negotiate.

But House Speaker Nancy Pelosi (D-Calif.) has made it clear she refuses to budge on federal funding for state and local governments.