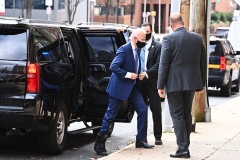 President-elect Joe Biden is seen wearing a boot after injuring his foot while chasing his dog, he says. (Photo by CHANDAN KHANNA/AFP via Getty Images)

"How is your foot, and what happened?" Tapper asked the incoming president:

"What happened was (Biden laughs) I got out of the shower -- I've got a dog. And anybody that's been around my house knows, the little pup dropped the ball in front of me and for me to grab the ball.

"And I'm walking through this little alleyway to get to the bedroom, and I grabbed the ball like this, and he ran, and I was joking, running after him to grab his tail. And what happened was that he slid on a throw rug and I tripped on the rug he slid on. That's what happened. Not very exciting story."

The Bidens have two German Shepherds, Major (the puppy, a rescue dog) and Champ.

Imagine the reaction if President Trump had been chasing a dog to "grab his tail."