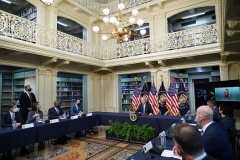 President Joe Biden takes part in a roundtable with CEOs in the library of the Eisenhower Executive Office Building on November 29, 2021. (Photo by MANDEL NGAN/AFP via Getty Images)

(CNSNews.com) - It's no secret that President Joe Biden can't or won't speak off the cuff. His remarks are mostly scripted, and that was evident on Monday, when the president met with corporate CEOs to discuss "his administration's work to move goods to shelves," as the White House put it.

"All right," Biden said, beginning the meeting and fiddling with his notes: "If I can get my pages unstuck here, we’re ready. I’m going to take my mask off when I speak here," he said.

"First of all, thanks for joining us today.  I really appreciate it. I know how incredibly busy you all are and the heck of a job you’re doing to make sure people aren’t disappointed this past Thanksgiving, as well as Christmas coming up."

Biden, reading from his binder, mentioned the new omicron coronavirus variant and said he would announce "a detailed strategy on how to deal with this new variant" on Thursday. "And that is not shutdowns or lockdowns, but with more widespread vaccination and more boosters, testing, and — and more."

Then, addressing the CEOs, Biden said he knows how "incredibly busy" they've been: "And that's a very good thing, from my perspective. But then again, I’m not doing all the work you all are doing. But all kidding aside, it really — it really matters."

Biden told the CEOs he wanted to "hear your ideas on how the federal government can continue partnering with you all to keep shelves stocked so American consumers can get what they need."

He addressed two of the CEOs by name, but all he heard was how well things are going, begging the question -- what was the point of the meeting?

After speaking to the head of Food Lion and the head of Walmart -- and hearing no complaints --  Biden told the gathering, "All right. Well, I guess I’m going to turn this over now to — to Brian (Deese). He’s going to moderate the rest.

"But I warn you, I’m going to intervene with -- with questions, with your permission." He paused, then filled the silence with a question: "Isn't this a pretty place?" Biden asked, indicating the room in which they were sitting -- a library in the Eisenhower Executive Office Building.

Biden's first question in his meeting with CEOs went to Food Lion President Meg Ham. "How did Thanksgiving go?" he asked her. "And can — can you tell me about your company’s ability to get the products you need from your suppliers and on your store shelves?  And just talk a little with me about what’s going on."

Ham told the president that Food Lion's supply chain is "strong and robust."

"We had a strong Thanksgiving holiday season and expect that that will continue into the...Christmas selling season as well," she said, never mentioning the price inflation Americans are seeing at grocery stores across the board.

However, Ham did say she appreciates passage of the Democrats' Infrastructure Investment and Jobs Act, which "has helped move us forward and will substantially improve the roads and the bridges to help the seamless supply of product across our 10-state footprint. "

"It's interesting you mention it," Biden said. "I think people underestimate just how out of sync our infrastructure has been for so long..."

Biden next turned to Doug McMillon, the CEO of Walmart, joking, "I know you run a small outfit called Walmart.

Biden told McMillon, "I spent more time walking through the aisles of Walmart than I want to admit over my -– because there’s one right down the street from where I live in Delaware."

McMillon thanked Biden for "shopping our stores," then said, "We think we’re going to have a really good holiday season. ...So, while we’re all concerned about the supply chain, we have more inventory than we did a year ago and have the inventory that we need to be able to support the business."

As mentioned above, the CEOs raised no concerns with the president, who earlier told them, "In particular, I want to hear about the challenges facing smaller businesses...I want to hear your ideas on how the federal government can continue partnering with you all to keep shelves stocked so American consumers can get what they need."

The event, at least the portion Biden moderated, presented no business challenges or constructive solutions.