Biden on Afghanistan: 'No One Is Being Killed Right Now, God Forgive Me If I'm Wrong About That' 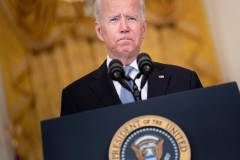 (CNSNews.com) - "Quite frankly, it's a tragedy," President Joe Biden said on Wednesday. But he was talking about the rising number of COVID cases and COVID deaths, not the debacle in Afghanistan, which he did not address in his only public appearance of the day.

However, in a taped (and edited) interview on Wednesday morning with ABC's George Stephanopoulos, Biden said his military advisers did not tell him he should keep 2,500 U.S. troops in Afghanistan to stabilize the country through the evacuation phase.

"No, no one said that to me that I can recall," Biden said.

Biden noted that the U.S. evacuated some 1,200 people on Tuesday, and he said the number is increasing. "We're going to get those people out," Biden said.

"Look, one of the things we didn't know is what the Taliban would do in terms of trying to keep people from getting out, what they would do."

(What they're doing is firing guns into the air and blocking access to the only functioning airport in the country, as panicked Afghans are seen scaling the airport fence to escape.)

Biden has set an August 31st deadline for the U.S. military mission to end in Afghanistan.

In the meantime, he said, " We're going to do everything in our power to get all Americans out and our allies out."

Does that mean the deadline will be extended beyond August 31? Stephanopoulos asked him.

Biden said "yes" twice when he was asked if he would commit to keeping U.S. troops in the country until all Americans are evacuated:

"How about our Afghan allies, does the commitment hold for them as well?" Stephanopoulos asked.

"The commitment holds to get everyone out that, in fact, we can get out and everyone that should come out, and that's the objective. That's what we're doing now. That's the path we're on, and I think we'll get there...We'll determine at the time who is left. And if there are American force -- if there's American citizens left, we're going to stay till we get them all out."

Biden said there was no intelligence "consensus" on the speed of the Taliban takeover: "The idea that the Taliban would take over was premised on the notion that the -- that somehow the 300,000 troops we had trained and equipped was going to just collapse, were going to give up. I don't think anybody anticipated that."