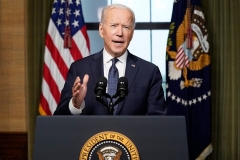 President Joe Biden will announce a tax-and-spending plan estimated at .8 trillion in a speech on Wednesday night. (Photo by ANDREW HARNIK/POOL/AFP via Getty Images)

(CNSNews.com) - Brian Deese, director of the National Economic Council, told a White House press briefing on Monday that President Joe Biden is "excited" to "lay out his plan to invest in American families," which Biden will do Wednesday night before a joint – but attendance-limited -- session of Congress.

According to Deese, Biden will make "reforms to our tax code that reward work and not just wealth. And one element of this reform will be to change how we tax capital gains."

"This change will affect taxpayers making more than $1 million a year," Deese said.

Capital gains taxes apply to the sale of stocks and other assets that have risen in value during the period the investor held them. The capital gains tax rate on investments is usually lower than that for ordinary income.

Deese said for the wealthiest Americans, capital gains and ordinary income should be taxed at the same rate.

Deese said the "wealthiest" Americans -- the 1,400 tax filers making more than $60 million a year -- have paid only about 20 percent of their reported income in taxes (which the tax code allows them to do).

"So their tax rate, which probably is overstated, again, because this is the category that often doesn't report or under-reports income--their tax rate is lower than many middle-class families' tax rate. This is the dynamic that led Warren Buffett to famously explain that he paid a lower tax rate than his secretary, and it's the--it is the dynamic that has led the president and others to argue that we need to do something about equalizing the taxation of work and wealth in this country."

Deese assured the briefing that the tax hikes President Biden will announce on Wednesday "are focused on this top sliver of people" (i.e., hedge fund managers) -- who will have capitals gains treated the same as ordinary income.

The plan smacks of wealth redistribution:

"And importantly, the revenue from this provision would...help invest directly in our kids and our families and our future economic competitiveness and put us in a position where we can drive greater economic growth."

Deese rejected a suggestion that raising the capital gains tax rate will discourage investments that help the economy grow:

"Certainly our view and reading of the evidence is that there is not a...correlation that would significantly affect investment for these highest income individuals, number one. And number two, we can use those resources to invest in areas that we know, where there is convincing academic evidence, empirical evidence, that investments, for example, in early childhood and in our children return enormous dividends in terms of their own academic success, reduced costs and healthcare system productivity and growth in the future."

He wants to boost spending on child care, paid leave for workers, and free community college. He's also expected to discuss other policy goals, including policing/racial justice, climate change, and access to healthcare in his Wednesday night speech.

White House spokeswoman Jen Psaki told the briefing, once again, that Biden is "not going to raise taxes on people making less than $400,000 a year, and he believes that the burden should be on the backs of corporations and highest level income people who can afford to pay more."