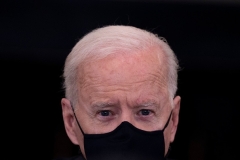 (CNSNews.com) - President Joe Biden sometimes appears at a loss during his on-camera appearances, not sure what to do or where to go next.

It's happened at least twice this week, most recently on Wednesday, as Biden gave remarks before a Cabinet meeting at the White House.

After naming Vice President Kamala Harris as his point person on border security, Biden thanked her -- then, apparently at a loss, asked what was happening next:

"Well, thank you for (being) willing to do it," Biden said. "Now we're going to get down to business here. And ah-- and ah, Ron, who am I turning this over to?" the president of the United States asked Chief of Staff Ron Klain.

"Well, thank you very much, Mr. President," Klain said. "I think it's time for our friends in the press to leave, though."

In Ohio on Tuesday, Biden felt the need to ask someone off-camera if he should keep his mask on while speaking.

"I guess I'm supposed to keep this on, correct?" the fully vaccinated Joe Biden said, touching his black face mask. "Yup," he acknowledged as someone indicated yes.

Biden's health and mental capacity has been subject to scrutiny since he announced his presidential bid.

At 78, he is the oldest person to assume the presidency. He will be closely watched at his long-awaited first news conference as president, happening later today.

Already, the White House has removed one thorny issue that is sure to arise at Thursday's news conference – the overrun southwest border.

By putting Vice President Harris in charge of border security, Biden can now refer all those difficult questions to her.

Many Republicans and even some Democrats say Biden has encouraged the surge in illegal migration by promising “humanity” at the border, and by allowing unaccompanied minors to come on in -- exempting them from public health measures that allowed President Trump to turn them away.

Also See:
Biden Forgets Defense Sec's Name: 'That Guy Who Runs That Outfit Over There'