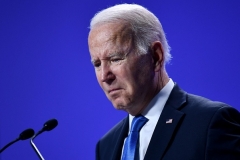 (CNSNews.com) - "That's not going to happen," President Joe Biden said on Wednesday, when a reporter asked him about reports that his administration plans to pay $450,000 each to illegal immigrants separated from their children at the border during the Trump administration.

In response, the American Civil Liberties Union said, "President Biden may not have been fully briefed about the actions of his very own Justice Department as it carefully deliberated and considered the crimes committed against thousands of families separated from their children as an intentional governmental policy."

Fox News White House Correspondent Peter Doocy asked Biden: "As you were leaving for your overseas trip, there were reports that were surfacing that your administration is planning to pay illegal immigrants who are separated from their families at the border, up to $450,000 each, possibly $1 million per family. Do you think that that might incentivize more people to come over illegally?"

Biden responded, "If you guys keep sending that garbage out, yeah, but it's not true."

"So, this is a garbage report?" Doocy asked.

"Yeah," Biden said. "$450,000 per person. Is that what you're saying?" the President of the United States asked the reporter.

"That was separated from a family member at the border under the last administration," Doocy repeated.

The ACLU is among the groups seeking damages on behalf of “thousands of traumatized children and parents who were forcibly torn from each other under the Trump administration’s illegal practice of separating families at the border.”

President Biden may not have been fully briefed about the actions of his very own Justice Department as it carefully deliberated and considered the crimes committed against thousands of families separated from their children as an intentional governmental policy.

But if he follows through on what he said, the president is abandoning a core campaign promise to do justice for the thousands of separated families. We respectfully remind President Biden that he called these actions ‘criminal’ in a debate with then-President Trump, and campaigned on remedying and rectifying the lawlessness of the Trump administration.

We call on President Biden to right the wrongs of this national tragedy.

The Wall Street Journal first reported that the United States was "in talks to pay hundreds of millions to families separated at the border."

According to that Oct. 29 article: "The Biden administration is in talks to offer immigrant families that were separated during the Trump administration around $450,000 a person in compensation, according to people familiar with the matter, as several agencies work to resolve lawsuits filed on behalf of parents and children who say the government subjected them to lasting psychological trauma."

The WSJ report said the Departments of Justice, Homeland Security, and Health and Human Services are coordinating the payments.

In April 2018, then-Attorney General Jeff Sessions announced a "zero-tolerance" policy to slow illegal immigration. As a result of congressional inaction, he said, "a crisis has erupted at our Southwest Border that necessitates an escalated effort to prosecute those who choose to illegally cross our border."

He warned that people illegally entering the United States "will not be rewarded but will instead be met with the full prosecutorial powers of the Department of Justice."

Under that policy, many parents were arrested and thus separated from their children, because children are not allowed in federal detention centers. Some of those families were never reunited.