Bernie Sanders: Trump Is Painting Democrats As the 'Namby-Pamby' Party of 'No' 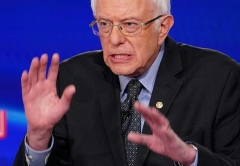 Senator Bernie Sanders (I-Vt.) is a former contender for the 2020 presidential nomination. He has now endorsed Joe Biden for president. (Photo by Mandel NGAN/AFP via Getty Images)

(CNSNews.com) - President Trump has long railed against Democrats as the "party of 'no,'" and he's doing it now on the issue of reopening the economy.

Sen. Bernie Sanders (I-Vt.) on Monday night agreed with CNN's Chris Cuomo, who told Sanders that Trump is "painting himself as 'yes' man and you (Democrats) as 'no' man. Are you worried about that as a party person?" Cuomo asked Sanders.

"I am," Sanders replied.

Sanders called for a "national policy" that would tell states and employers how to safely reopen. "So what you got now, Chris, and this is really quite unbelievable when you think about it, you got 50 states scrambling on their own, each moving in a different direction.

"Clearly, what we need is a national policy which helps the states and the communities based on science know how to go forward, bring workers back, bring kids back to school, if necessary, but do it in a way that is safe."

Here is the way Chris Cuomo framed the question to get the answer he wanted, as well as Sanders' full response:

What is your thought about an emerging theory that I have, which is he is painting you, not just Bernie Sanders, it would be hard to do it to you, honestly, because you have been pushing the Democratic Party to become the party of yes, yes, we'll try this; yes, we'll do that; yes, we'll expand this, and you had a big impact on the culture of your party's rhetoric, at least.

We'll see what Biden runs on and what the Congress backs up on. But he's now painting you as the party of no. Re-open? No, no, no, no, not yet. Get back to work, no, no, no, you can't do it this way. Get back to living, no, no, no. He's painting himself as 'yes' man and you as 'no' man. Are you worried about that as a party person?

"I am," Sanders replied, warning that Trump is painting the Democrats as "namby-pamby."

What he is doing, and it is extraordinarily dangerous, he has from day one of this crisis, he has minimized the danger, downplayed the danger. Not listened to the scientists. Not used the Defense Production Act to produce the masks and the gowns that our doctors and medical personnel need. He has downplayed this.

And now what he's saying is, hey, I'm tough, let's get back to work, don't listen to those namby-pamby Democrats. I think that's your point. And I think you're making a good point. And what we have got to say is, of course, we want the American people to go back to work, but we're not going to sacrifice lives unnecessarily.

If I'm going to go to work in a factory, you know what? I think I want to know that the guy who's working next to me is not positive for this coronavirus because even if I don't get sick, I don't want to go home and get the virus and then give it to my grandmother who has a serious heart ailment or diabetes.

I don't want to kill somebody who is vulnerable to this virus. So, Trump says you don't have to worry about those things. Well, I think you do. And I think we have the science now.