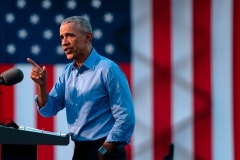 (CNSNews.com) - President-elect Joe Biden "is in a good position" to build back "social trust" in the White House, after the "constant cage match" of the Trump presidency, former President Barack Obama told "The Late Show" with Stephen Colbert.

"He will have some success in building back social trust because he is naturally someone who is empathetic and cares about people," Obama said of Biden:

But -- I think that we're going to have a larger challenge in figuring out what to do about this splintered media landscape. And I've said this before, but I can't emphasize this enough, when you and I were growing up, you know, you had Walter Cronkite, David Brinkley, you had John Chancellor.

It wasn't scintillating television, but whether you were a conservative or a liberal, you got your news from the same place, so you had some common baseline of facts, and now you don't.

And how you change that formula, with the Internet and 5,000 cable stations and the death of small-town newspapers and even local TV now being bought out by Sinclair so that they're now pumping out sort of a more uniform ideological line on everything, that makes things more difficult.

And I think that Joe's presidency will help lower the temperature, but the underlying challenge of us getting back to the point where we can at least agree that, let's say, Joe Biden got more votes. You know, if that's -- we can argue about why, or whether he deserved to get more votes, et cetera, but he got more votes.

Obama used a football analogy to illustrate his point:

Look, I was talking to friend of mine about this, and I was just trying to use a simple analogy that I think everybody understands -- what's something we still have in common? And despite controversies around [CTE], et cetera, people still watch football.

So you imagine the Super Bowl and, you know, the game's going on and touchdowns are supposed to be worth six points with the extra point, unless you go for two, and field goals are worth three points, and you're keeping score the whole time, and there are refs and so forth. And then at the end of the game, a team's won and somebody says, No! Field goals aren't worth three, or that wasn't really a touchdown.

We've all been watching, and I guess, if you had -- the other team just refused to acknowledge it, and you had half the league say we're not sure it's true, you'd have a similar controversy. But when that starts happening, the game breaks down. And in this case, it's not a game, it's our democracy, our democracy starts falling apart. Imagine if, going forward, every single election is treated this way at every level, imagine if Democrats start acting this way--"

Colbert interrupted: "Is that part of the danger that he's (Trump) broken the seal on that idea?"

"That is the concern that I think we all have," Obama said. "Joe Biden's going to be the next president, Kamala Harris is going to be the next vice president, but we don't want to get into a pattern where we just are willing to throw out what we've agreed to previously, including our constitutional structure, just because we find it politically expedient."