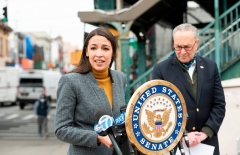 Rep. Alexandria Ocasio-Cortez (D-N.Y.) reportedly is mulling a primaray challenge to Senate Majority Leader Chuck Schumer (D-N.Y.). She's now pressing Schumer to include a pathway to citizenship in the Senate version of the Build Back Better Act. (Photo by JOHANNES EISELE/AFP via Getty Images)

(CNSNews.com) - Rep. Alexandria Ocasio-Cortez (D-N.Y.) and some of her leftist colleagues are urging Senate Democrat leaders to reinstate a pathway to citizenship for millions of illegal aliens when they consider the House-passed version of the reconciliation bill, dubbed the Build Back Better Act.

In her Nov. 22 letter, co-signed by dozens of House Democrats, Ocasio-Cortez wrote: “The moment is now. We urge you to reinstate a pathway to citizenship for Dreamers, TPS (Temporary Protected Status) holders, farm workers, and essential workers in the Senate’s version of the reconciliation bill."

Ocasio-Cortez acknowledged that the Senate parliamentarian has issued a memorandum dismissing the budgetary impact of providing a pathway to citizenship, meaning it cannot be included in a reconciliation bill.  "But the role of the Parliamentarian is an advisory one, and the Parliamentarian’s opinion is not binding," she wrote.

In a news release announcing the letter, AOC noted that the House version of the Build Back Better Act "secured protections and work authorization for undocumented individuals," but only on a temporary basis. "[T]he bill does not include a permanent pathway to citizenship," she wrote.

"Our community has made clear that this is not acceptable. Throughout these past few months, Bronx and Queens families, as well as our grassroots immigrant advocates, have been united and unfaltering in their message: Democrats promised a pathway to citizenship, and we must deliver one.

"As this bill heads to the Senate, we must fight to ensure that we do not squander this once-in-a-generation opportunity. The Senate must establish a pathway to citizenship and finally provide Dreamers, TPS holders, farm workers, and essential workers with the stability and equal recognition they deserve."

The gigantic House Build Back Better bill is actually many bills in one, including the green new deal. It establishes new entitlement programs, expands the reach of government, and by the Democrats' own admission, it would "transform" the social fabric of the country by taxing the rich to subsidize "working" Americans who find it hard to pay their bills. It would also subsidize clean energy at the expense of the oil and gas industry, on which all Americans currently depend.

Rep. Jason Smith (R-Mo.), the ranking member of the House Budget Committee, told Fox Business on Tuesday that Democrats, led by the squad, "are just doing anything they can to push through their progressive wish list."

“As we know, the bill that just passed Congress -- more than $100 billion was in this piece of legislation to do a back-door amnesty approach of using these renewable five-year visas. Also in this legislation, Maria (Bartiromo), there's eligibility for illegal immigrants to receive roughly $45,000 worth of government benefits a year.

Smith said he believes that Democrats, when they meet their constituents over the Thanksgiving break, will hear loud complaints about all the spending, taxing, and attempts to "transform" the country. "And they are going to see what the polls are showing, that 43 percent of Americans find that this bill will only make their lives worse," he added.