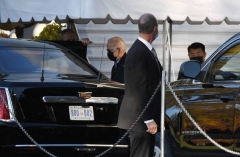 President Joe Biden heads out to Walter Reed Medical Center for what the White House calls a "routine physical" and colonoscopoy on November 19, 2021. (Photo by OLIVIER DOULIERY/AFP via Getty Images)

But according to guidance issued by the American Cancer Society, colonoscopy should not be routine for people older than 75. President Biden will turn 78 years old tomorrow.

According to the American Cancer Society:

The ACS recommends that people at average risk of colorectal cancer start regular screening at age 45. This can be done either with a sensitive test that looks for signs of cancer in a person’s stool (a stool-based test), or with an exam that looks at the colon and rectum (a visual exam). These options are listed below.

People who are in good health and with a life expectancy of more than 10 years should continue regular colorectal cancer screening through the age of 75.

For people ages 76 through 85, the decision to be screened should be based on a person’s preferences, life expectancy, overall health, and prior screening history.

People over 85 should no longer get colorectal cancer screening.

The White House says it will release a written summary of the president’s physical later this afternoon. And because he’s going to be under anesthesia for the procedure, Biden will transfer power to Vice President Kamala Harris for that brief period of time.

According to the Journal of the American Medical Association: