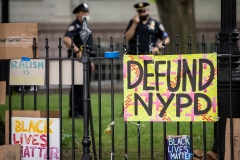 Protest signs in City Hall Park in Manhattan as seen on June 30, 2020. (Photo by Ira L. Black/Corbis via Getty Images)

"I think there's a serious, significant rise in violent--major violent crime, beginning last year. Yes, I do," Garland told Graham at a hearing of a Senate Judiciary subcommittee.

"What do you think has caused that?" Graham asked.

"We just don't know," Garland said, noting that he's lived through "several crime waves," the causes of which are difficult to figure out.

Graham tried again: "Is it possible that some of the rhetoric about defunding the police and actually reducing police capability has created some of the problems?"

"I just don't know," Garland said. "There are a lot of factors here, of course, the biggest one being the pandemic. And I just don't know at this point how to disaggregate--"

Graham interrupted: "So you think the pandemic's more of a root cause than declaring war on the police?" he asked.

"Well," Graham said, "do you think that's a possibility, that we have gone too far in reducing police capability? Is that a possibility?"

"I think I gave the answer to Senator Collins, and I'd give the same one, which I think it is--this Justice Department, this administration, does not believe in defunding the police," Garland said. "We believe in supporting the police.

"We also believe that community policing is very important, and developing trust between the community and the police department is essential to stop violent crime. And we also think that includes holding police accountable who violate the Constitution," Garland said.

"I agree with all of that," Graham told Garland. "We want to work with you on police reform. But I guess it's pretty obvious to me that there's been a pushback to this defunding the police. It hasn't worked -- that the effort to marginalize police forces has gone too far. And I think we're seeing the results of that, and if we don't change our rhetoric in some parts of the country, it's going to get worse."

'We are not asking to defund the police'

Sen. Susan Collins (R-Maine) told Garland that police departments nationwide are having "great difficulties in retaining and recruiting police officers. And in every single case where I've talked to police officers and police chiefs, they say that it's due to the fact that there's been this vilification of law enforcement rather than trying to strengthen and improve practices of police departments and that the ill-conceived defund the police movement has also led to significant problems."

Collins asked Garland, "Do you personally believe that efforts to vilify rather than improve our police departments, including the defund the police movement, have contributed to these recruitment and retention problems?"

Likewise, for the Byrne JAG grants, we've asked for $513.5 million, which is a $29.5 million increase. So, no, as President Biden has made absolutely clear, we are not asking to defund the police.

Now a lot of what we are doing in addition to supporting hiring is trying to support trust building between communities and police departments. Not to vilify anyone, but as I said in previous testimony for police to do their work well and safely they need to have the trust of the community. And the community needs to have trust in the police department that their civil rights will be protected.

This includes accountability for police officers who violate Constitutional rights but it does not have anything to do with vilifying whole departments or anything like that. The Justice Department has responsibility under the statutes provided by Congress to pursue investigations where we believe Constitutional rights have been violated and we have announced I think two of those.

But that is a completely different question than--than--than where we are that--that you're asking about. And I want to be clear that these are two--you can hold both of these in your hands at the same time, and--and not be inconsistent with each other.

Collins told Garland she knows he is trying to improve policing: "But I was trying to get your personal opinion on whether this (defunding) effort, which you're not a part of, is contributing to the recruitment and the retention problems that are being experienced all over the country."

"Yeah. I have to say, to answer that question requires data that I just don't have," Garland said. "Requires all kinds of survey data and--and I--and I, you know, anecdotally, I've heard some things like you're saying. But I really don't have any data that I can confidently give you an answer to."