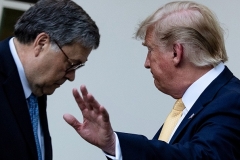 US Attorney General William Barr is ending his tenure with the Trump administration on a sour note. (Photo by BRENDAN SMIALOWSKI/AFP via Getty Images)

(CNSNews.com) - Outgoing Attorney General William Barr held what may be the final news conference of his tenure on Monday to announce new charges against a former Libyan intelligence operative suspected of building the bomb that killed 270 people on Pan Am Flight 103 over Lockerbie, Scotland on Dec. 21, 1988.

But reporters were more interested in other aspects of Barr's job, asking him -- among other things -- whether a special counsel should be appointed to investigate the allegations against Hunter Biden, the president-elect's son.

"I think to the extent that there's an investigation, I think that it's being handled responsibly and professionally currently within the Department, and to this point, I have not seen a reason to appoint a special counsel, and I have no plan to do so before I leave," Barr said.

A number of Republicans, including President Trump, have called on Barr to appoint a special counsel in the Hunter Biden case.

The Biden-Harris transition team announced on Dec. 9 that Hunter Biden's "tax affairs" are under investigation by a federal prosecutor in Delaware. But it is not unprecedented for new administrations to replace current U.S. attorneys with a new slate.

Barr, however, did see a reason to make U.S. Attorney John Durham a special prosecutor before the election. Barr told the Associated Press three weeks ago he made Durham a special counsel in October, thus making it more difficult for the incoming administration to fire Durham, thus ending the ongoing probe into the origins of the FBI's Trump-Russia investigation.

According to the AP, "Barr decided 'the best thing to do would be to appoint (Durham) under the same regulation that covered Bob Mueller, to provide Durham and his team some assurance that they’d be able to complete their work, regardless of the outcome of the election.'”

Barr said at the time that Durham's criminal probe had "narrowed considerably” and now “really is focused on the activities of the Crossfire Hurricane investigation within the FBI.”

At today's news conference, Barr said Durham and his team are "making good progress now, and I expect they will be able to finish their work."

As for the Hunter Biden investigation, Barr said on Monday, "I'm hoping that the next administration handles that matter responsibly."

On another topic, Barr said he "sees no basis now" for the federal government seizing voting machines.

Sens. Graham, Cotton Step Up Call For Special Counsel: ‘We’re Not Going to Sweep This Under the Rug’