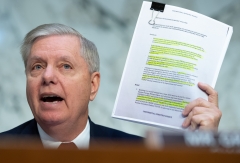 On July 13, CNS News asked the senator, “Is it appropriate for President Biden to be traveling to Saudi Arabia and meet[ing] with the Crown Prince Mohammed bin Salman?”

Graham raised no concerns about Biden’s destination, but advised that we “talk about our baggage” with Saudi Arabia.

The senator called Saudi Arabia a “strategic ally” that he wants to participate in a human rights discussion.

“But we also should realize that imperfect as Saudi Arabia is, they’re a strategic ally,” said Graham.  “But I think that for the trip to be meaningful, we should have a discussion about human rights.”

Human rights advocates have criticized Biden’s trip due to Saudi Arabia escalating the violence in Yemen, a seven-year war that the United Nations called “the worst humanitarian crisis in the world” in 2019.

Yemen remains the worst humanitarian crisis in the world.

🔻2/3rds of all districts are pre-famine.

On 26 Feb, we ask donors to be generous at the pledging conference in Geneva: #InvestInHumanity https://t.co/byYX04kI8a

Saudi human rights advocate Hala al-Dosari, who now lives and teaches in the U.S., called Biden’s decision to meet with the Crown Prince a “betrayal,” the Associated Press reported.

In April, the parties fighting in Yemen agreed to a truce proposed by the United Nations. It has been renewed for an additional two months, an action for which Biden praised Saudi Arabia’s “courageous leadership.”

“This truce also would not have been possible without cooperative diplomacy from across the region,” Biden said in a statement on the truce extension. “Saudi Arabia demonstrated courageous leadership by taking initiatives early on to endorse and implement terms of the UN-led truce.”

The Biden administration is allegedly considering resuming its sales of U.S. offensive weapons to Saudi Arabia, if it progresses toward ending the war in Yemen, according to Reuters.

During a 2019 Democratic debate, Biden denounced Saudi Arabia as a “pariah” state.

He vowed to make Saudi Arabia “pay the price” for their reported killing of Washington Post journalist Jamal Khashoggi in 2018. Intelligence reports said that the crown prince approved the murder.

The White House declined to tell Fox News whether President Biden would bring up Jamal Khashoggi’s name during meetings with Saudi officials.

“Based on our conversation, I got this feeling it will take up my husband’s tragedy and human rights with Saudi authority,” said Hanan.

She said if she could be at the meetings this week, she would tell the Crown Prince and anyone involved in her husband’s murder that they “will regret if [they] know the truth about Jamal.”